Men arrested in relation to Dublin shooting released without charge

The incident took place at 11:30am on Friday at an industrial estate at Killeek Lane 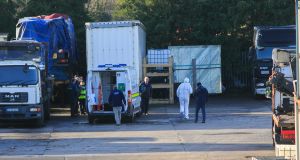 Gardaí at the scene of the shooting at an industrial estate on Killeek Lane, Co Dublin, in which two men were critically injured. Photograph: Gareth Chaney/Collins

Two men arrested in relation to a shooting incident in north Dublin on Friday have been released without charge.

Two men were critically injured in the shooting, which happened at about 11.30am at Killeek Lane in St Margaret’s. One of the men was shot up to five times, including to the head.

They were questioned under section 30 of the Offences Against the State Act, 1939 but were released without charge on Sunday evening. A Garda spokeswoman said the investigation into the shooting was ongoing.

The wounded men are both involved in the haulage sector. They were sitting in a blue Mercedes car outside a business premises on an industrial estate when a car arrived carrying a gunman, who walked up their car and opened fire.

The victims were attended to by paramedics at the scene before being taken to Beaumont Hospital and Connolly Hospital, Blanchardstown.