‘Most, if not all’ of Ballymurphy victims not in IRA, inquest hears 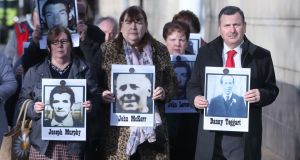 Family members hold images of some of those who died in disputed circumstance in Ballymurphy in 1971, outside Laganside Courts in Belfast as the inquest into their deaths continues. Photograph: Niall Carson/PA Wire

Most if not all those killed following gunfire by British soldiers during a pitched battle in west Belfast were not in the IRA, a retired army general said.

Ten people died over three “rebellious” days at the start of internment in August 197.

A coroner at Laganside Courts in Belfast is examining a series of shootings by members of the Parachute Regiment in Ballymuryphy.

Sir Geoffrey Howlett (89), one of the highest-ranking former British officers to appear before an inquest into Troubles deaths, expressed “enormous sympathy” with families whose relatives died .

“I realise now that most, if not all, were not IRA.”

He said people who were on the street were not necessarily associated with paramilitarites, despite the acknowledged level of support for the IRA in the area.

Tensions linked to internment saw disorder escalate into what the soldier described as a full-blown battle, and many hundreds of rounds were fired at his men. The then-lieutenant colonel was commander of the Second Battalion, the Parachute Regiment, between 1971 and 1973. A contemporaneous regimental note before the inquest said soldiers viewed the incident as one of inflicting “severe casualties” on the IRA.

Sir Geoffrey accepted the army’s record of the time may have been mistaken.

He told relatives of the dead: “I want just to say to you how sincerely I have enormous sympathy with you all.

“I know something about bereavement because my father was killed in Italy in the war when I was 13, and I wanted to know everything about how it happened as well,” he said from the witness box as three rows of families of the victims sat opposite him in silence.

The Ballymurphy families maintain their loved ones were innocent.

Sir Geoffrey was at an army headquarters in west Belfast during part of the events in question then went to an army base to resupply his men with ammunition. Up to 40 rounds were fired at his two Land Rovers as they entered the hall.

It was reported to him by B Company, a sub-group of about 100 men, that the violence was started by a large group who attacked soldiers.

“The situation was never the same again, life was difficult,” he said. “Following internment there had become an enemy out there who were definitely armed and firing at us.”

“It was quite obvious that Fr Mullan was not part of the IRA, and he was almost certainly, I believe, giving the last rites for someone who appeared to be dying,” the witness said.

“Which of the other people who were shot and killed, whether they were IRA at the time, I don’t think we quite knew.”

Sir Geoffrey recalled escalation of the violence in west Belfast in 1971 after troops were charged with implementing internment of suspects without trial.

“None of us realised that the day of internment (August 9) and the next day or two would turn out to be such a rebellious period with as much rioting, shooting, petrol and nail bombing as it was.”

The streets were barricaded amid “looting, shooting and bombing”, Sir Geoffrey said. “The situation went from rioting to a full-blown battle.

After Ballymurphy, no soldier was disciplined and there was no debrief, the witness said. “We were too busy trying to get Belfast back to normal,” he said.

After the hearing concluded, John Teggart, the son of one of the victims, Daniel Teggart (44), said it was almost an apology.