‘It is a terrible tragedy. The entire community is in shock,’ says councillor 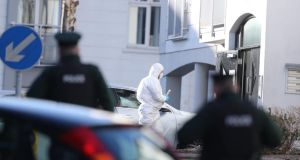 Police forensic officers at Glin Ree Court in Newry, Co Down, where the bodies of a man, a woman and a teenage girl were discovered in a flat on Thursday morning. Phototgraph: Niall Carson/PA Wire

Glin Ree Court apartment complex, on the main road out of Newry towards Belfast, is but a few hundred meters from the town’s large police station.

But, unbeknownst to everyone, extreme violence occurred inside one of the flats perhaps three days ago, leaving a scene of tragedy and horror to be discovered yesterday morning.

While little has been confirmed for certain, the widespread view in the Co Down town is that a mother, aged perhaps 37 according to police, was murdered inside an apartment, believed to be a third floor flat, along with her daughter, said by police to be perhaps 15-years-old.

A distraught woman who approached the taped-off slip road into the complex yesterday afternoon, said she knew the woman and that she was from Colombia.

Asked the dead woman’s name, the woman said what sounded like “Jizelli” but she was too upset to say more as she walked away.

A young man left a bunch of chrysanthemums with two PSNI officers keeping the media at bay.

Local political sources who had been in touch with the police, said that when officers burst into the apartment yesterday morning, they found three bodies – the woman and the teenager, and also the body of a man – and that all three had died violently.

The police were alerted by a relative who had not heard anything for some days and became worried.

The cause of that worry has not been disclosed, if it is known.

What the relationship was between the woman and the man, if any, has also not been disclosed but local people assume that there was one. Initially, suggestions locally were that the man came from Newry, but later, it was said he was from Scotland.

The town, like many in Ireland, has become home to many foreign nationals, though local politicians say that since Brexit emerged, many from eastern Europe had left.

“This is a big shock, irrespective of where [the victims] were from,” said Councillor Michael Savage of the SDLP. “It’s hard to comprehend . . . I am sad for the family and friends of these people who are only getting this news now.”

The sentiment of shock and disbelief was shared by fellow councillor Charlie Casey of Sinn Féin.

“It is a terrible tragedy,” he said. “The entire community is in shock.”

Glin Ree Court is a complex of seven blocks, build in recent years on the site of a former military base.

The complex is well kept and home to many transient residents, some from other parts of the UK, some from eastern Europe and some from further afield.

Throughout yesterday, police forensic investigators could be seen entering and leaving the third block back from the road.

It is believed they were working in a third floor apartment (above a second floor flat that is for sale), hoping to find evidence to explain what happened and how – if not why.

Among those who visited the scene was the PSNI Assistant Chief Constable Mark Hamilton, evidence of the fact that three violent deaths in a place of residence, however caused, constituted a very major crime in any jurisdiction.

Mr Hamilton did not talk to the mill of reporters and camera crews corralled back from the apartments but local sources say he commented that “what happened, happened inside that apartment and there’s no danger to the wider community”.

In due course, the lead investigator, Det Supt Jason Murphy, confirmed that PSNI officers were not seeking anyone else in connection with what happened, suggesting that one of the three killed the other two, before taking their own life.

However it was done, it was done bloodily, said a local political source. It is not believed that a firearm was involved but that the cause of the deaths may have involved blunt instrument trauma and/or knife wounding.

“They’d not been seen for three days,” said the source, “which means that whatever happened could have happened three days ago.”

As the sun set, the sky darkened and rain spat down, Supt Murphy told reporters all that he was prepared to say. Residents returning after a day’s work were greeted by an unfamiliar scene, a scrum of TV camera crews, ace lights, photographers and reporters.

And they learned that something awful had occurred where they live – an as yet unexplained, and perhaps ultimately, a not wholly explicable, tragedy in which a woman, her daughter and a man have died.

1 Coronavirus: Varadkar returns to practising medicine to help during crisis
2 Donald Trump’s clown car administration has put the fear in all of us
3 Robbie Lawlor profile: A feared criminal with a long list of enemies
4 Coronavirus: Number of Irish cases nears 5,000 as 21 further deaths confirmed
5 Fewer deaths in Veneto offer clues for fight against coronavirus
Real news has value SUBSCRIBE