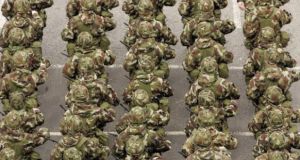 Defence forces: While recruitment has stepped up, it cannot keep up with departures. Photograph: Alan Betson

So many officers trained in counterterrorism, cyberdefence and other key areas are leaving the military that the viability of the Defence Forces is now at risk, the officers have warned.

The Representative Association of Commissioned Officers (Raco) said a failure of Department of Defence policies is to blame.

In a strong statement from an organisation that rarely speaks out against Government policy, Raco has said the sheer numbers of personnel now leaving the Defence Forces has created a crisis.

General secretary Comdt Conor King said the Department of Defence must work so more personnel can be retained.

Those who joined from 2013 also face being forced to retire on age grounds long before they would be entitled to a pension, and that was forcing many to plan now for an early departure from the Defence Forces.

They were planning to leave in their 30s, which would normally be the point of their careers where they would be taking up senior leadership positions.

“The current retention crisis in the Defence Forces is well documented but what this survey shows is that the situation will only get worse unless the Government takes decisive action,” Comdt King said.

“Any objective person can see that Department of Defence policies are failing our members and failing the State.

“The cost-benefit of retention over unsustainable recruitment has yet to be realised by the Department”.

Raco is calling on the Government to intervene to help end what it says is a retention crisis “as it is spiralling out of control with the future viability of the Defence Forces under threat”.

A Raco Amárach Consulting survey of more than half of its 1,200 members has revealed 79 per cent are planning to leave “due to the lack of a viable career path as a result of Department of Defence policies”.

While recruitment has been stepped up significantly in recent years it cannot keep up because there have been so many departures.

Raco says many of its members are struggling to motivate the underpaid personnel they manage. And PDForra, which represents non-commissioned soldiers, sailors and airmen, says its members are leaving because they cannot afford to remain in the Defence Forces, such is the low remuneration.

Raco added recent figures presented to the Public Service Pay Commission showed officer strengths in the Army operational units are down to 55 per cent, to 78 per cent in the Naval Service and 77 per cent in the Air Corps.

There was also a “worryingly high turnover rate” of 8.1 per cent annually. It was “clear that the Department of Defence attempts to recruit their way out of this crisis are failing”.

In the White Paper on defence published in 2015, the Government set out its plans for the sector for the following decade. A central commitment was to maintain the Defence Forces at a minimum of 9,500 members, excluding those who had just joined and were undergoing training.

In August 2017, exactly two years after the White Paper was published, it emerged numbers in the Defence Forces had fallen below 9,000 for the first time since the organisation was increased in size four decades ago when the Troubles necessitated more troops.

There were, at that time, 8,990 personnel in the Defence Forces with an additional 385 in training.