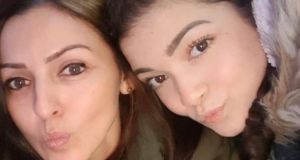 Giselle Marimon-Herrera and her teenage daughter Allison were killed at Glin Ree Court in Newry on Thursday.

Police investigating the deaths of a mother and daughter whose bodies were discovered in Newry on Thursday believe both were strangled.

The PSNI on Friday confirmed the names of the pair who were found dead in an apartment block in the town as Giselle Marimón-Herrera (37) and her daughter Allison (15). Colombian media gave the woman’s first name as Irina.

The victims’ family have requested consular assistance to allow them travel to Northern Ireland.

Fabian Marimón, the woman’s father, said he was seeking help through diplomatic channels to visit Newry to find out what happened to his daughter.

A 38-year-old man, who police believe was the woman’s partner, was also found dead at the apartment at Glin Ree Court in an apparent suicide.

Detectives confirmed his identity on Saturday.

Detective Superintendent Jason Murphy said: “I can now confirm that the man found dead at the property in Glin Ree Court in Newry was 38 year old Russell Steele, who was originally from Scotland. ”

Det Supt Murphy, who is leading the investigation, said one of the suspected motives for the deaths was domestic violence.

In a statement released on Twitter last night, the PSNI said postmortems on the bodies of the mother and daughter confirmed that the cause of the 15-year-old’s death was strangulation and there was a strong possibility her mother was strangled also.

Following post mortems detectives can confirm that the cause of 15 year old Allison Marimon-Herrera's death was strangulation.

Results are not definitive for Giselle (37) however at this stage detectives believe there is a strong possibility she too was strangled.

Officers forced entry into the apartment following a phone call from a concerned relative who was unable to reach them.

Det Supt Murphy would not speculate on reports that it was a murder-suicide case. However, police are conducting a murder investigation and are not looking for anyone else in connection with the killings.

He said that Allison was born in Spain and was living in Northern Ireland for about four years. She attended Newry High School where counsellors comforted fellow students on Friday morning.

“I believe that Giselle and Allison were still alive in the early hours of Sunday morning but family members have not been able to contact them since. The exact circumstances of what happened in their home remains the subject of our investigation,” Det Supt Murphy told reporters.

“I would appeal today to anyone who came into direct contact with either Giselle or Allison or communicated with them via text or social media since Friday to contact detectives in Newry,” he added.

“We are currently supporting the families of those involved as well as Newry High school. I would ask that they are given the time and space to come to terms with these tragic events.”

He said the deaths were an “unspeakable tragedy” and repeated his appeal for anyone with information to bring it to the police.

Yadeli Marimón, the sister of the deceased woman, told local media that the family had become worried after not hearing from Irina or her daughter Allison since the weekend. “We knew nothing about her since Sunday. She hadn’t been in contact so we got in touch with her friends to ask if they’d heard anything but they said no,” Ms Marimón told Caracol Radio.

Ms Marimón-Herrera had reportedly spent more than 20 years living in Europe since leaving her home in the city of Barranquilla on Colombia’s Caribbean coast. It is understood she worked at the Independent News & Media plant in Newry.

She had spent four years in Ireland and had been in a relationship for three of these years, according to her sister. “She never told us he was mistreating her,” Ms Marimón said on Thursday.

Ms Marimón said the family was confused by what had happened to Irina and her daughter and it was looking for clarity from the relevant diplomatic consulate in Colombia. She also requested that the consulate help her parents travel to Ireland in order to bring the bodies back home to Colombia.

Mr Marimón told local media organisation Zona Cero that his daughter had asked that her parents visit Northern Ireland. “She wanted us to go over there to visit them but we couldn’t make it happen because there were lots of barriers,” Mr Marimón said, adding that he last spoke with his daughter on February 27th. He said his two sons, who also live in Europe, were devastated by the news of their sister’s death.

It is understood that Allison Marimón spent two years studying in Barranquilla, Colombia between 2014 and 2015.

A spokesman for the Spanish embassy in Dublin said they had not received contact from the Ms Marimón-Herrera’s family in Colombia regarding Allison.

The Colombian Ministry of Foreign Affairs said it had been made aware of an incident that occurred Newry on March 7th when Giselle Irina Marimon Herrera and her daughter died.

“The Ministry of Foreign Affairs has been in contact with family members and is providing them with support in navigating the official British processes for securing a visa so that the family of the deceased can travel to Northern Ireland.

“The Colombian consulate in London is pushing forward the investigation being carried out by local authorities in the hopes of obtaining more information about what happened. The consulate will continue to provide the support that’s needed”.