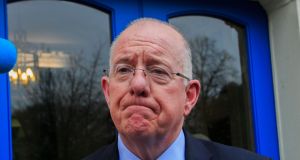 An Irish woman suspected of association with Islamic State in Syria may face serious charges if she returns to Ireland, Minister for Justice Charlie Flanagan has said.

Lisa Smith (37) from Dundalk left for Syria about five years ago, after stepping down from the Air Corps where she served as a flight attendant on the Government jet at the rank of corporal.

Despite widespread reports that Ms Smith had been captured by US forces, it is understood she and her two-year-old child are currently in the Al-Hawl refugee camp along with about 500 other wives and children of Islamic State (Isis) fighters.

He said Ireland had strong counter-terrorism laws which “provide for prosecution here of terrorist offences committed outside the State”.

Any prosecution would be very challenging. “We have our statutes but what we need is the evidence in order to ensure the conviction and that is where a real difficulty arises,” he earlier told RTÉ.