Issues raised around State’s responsibility to Smith and child 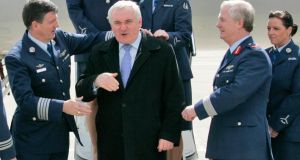 Lisa Smith on the extreme right of picture as then taoiseach Bertie Ahern thanks members of the Aer Corps before boarding the Government jet in 2008. Photograph: Collins Dublin

It is tempting to equate the case of Dundalk woman Lisa Smith with that of Shamima Begum, the London teenager who ran away to join Islamic State when she was 15.

Smith (37) and Begum (19) both travelled to northern Syria after allegedly becoming radicalised by Islamic extremists, and both had children while there. Smith’s boy is two years old; Begum’s three-week-old infant was her third child to die.

Both recently fled from the town of Baghouz, the last Islamic State (Isis) stronghold in Syria, following a final assault by the Syrian Democratic Forces (SDF). Both ended up in Al Hawl, the over-burdened refugee camp which houses family members of Isis fighters.

The pressure of life got to me. There was so much pressure to look good . . . and there were no morals, nothing solid

And both cases will be the subject of heated debated here and in the UK about what should be done with western citizens who travel to join extremist organisations.

But there are several key differences between the two women. Begum was born in Britain and held citizenship there, citizenship which was stripped from her recently by the UK government.

It argued this would not be a breach of international rules against leaving people stateless as Begum was also a citizen of Bangladesh through her parents, although the Bangladeshi government disputes this.

The Irish Government cannot strip citizenship from Smith as she is not a citizen of any other country, through her parents or otherwise.

The individual responsibility of each woman for their actions is another key difference. Begum was a 15-year-old schoolgirl when she travelled to Syria. Many have argued she was a vulnerable victim brainwashed by malevolent adults.

Smith cannot make the same case. She was a worldly woman in her early 30s when she went to Syria.

In a 2011 interview with the Irish Independent, she comes across as a highly intelligent and spiritual young woman who considers her decisions before acting on them.

On the subject of her recent religious conversion, Smith said Muslim women “seemed so peaceful and content and they never worried about stuff. So I asked one of them for the loan of their Koran. I read it and knew straight away it was for me.”

It was not a spur of the moment decision. She had previously sought solace in Buddhism as well as “fairies, angels, reiki, the works”.

A self-described “party-girl” previously, Smith said she dabbled in “drink, drugs, smoking, everything”. But she became tired of this lifestyle and sought more meaning in life.

“The pressure of life got to me. There was so much pressure to look good . . . and there were no morals, nothing solid. I was all airy-fairy on the outside but inside I knew there was something wrong.”

Before making the final decision to convert to Islam she said she studied it “nearly 24 hours a day”.

At the time, Smith was a corporal in the Air Corps working in the Army transport unit. Before that she served as a flight attendant on the Government jet, work that saw her travel the world and interact with Irish Government leaders including taoisigh and then president Mary McAleese.

Dermot Ahern, who served as minister for justice, recalled her as “a lovely girl and very efficient”.

“There would have been a lot of people on the Government jet for all of the years that I was there, but she was the only one from my hometown and she had a distinct Dundalk accent,” he told The Irish Times.

“I immediately asked her if she was from Dundalk. We struck up a friendship. I was shocked when I picked up the paper. When I saw the picture I immediately recognised her.”

Smith first joined the Defence Forces at 19 as a private in the Army’s 27th Infantry Battalion. She initially applied for a role in the Military Police but failed a marksmanship course.

Her eventual departure from the military in November 2011 came shortly after a dispute with superiors who had refused her permission to wear a headscarf while on duty.

In the 2011 newspaper interview, she said she wanted to leave “because my role as a Muslim woman is to be a housewife, or to get a job working with other women. Working with men is not a good thing for a Muslim woman.”

Around this time, Smith first appeared on the Garda radar. Officers suspected she was becoming radicalised through some of her associates, and limited surveillance was put in place.

Although Smith sympathised with Islamic State and married one of its fighters, criminal charges are unlikely as there is currently nothing to suggest she provided material support to the terrorist organisation.

With a few exceptions, Isis does not allow women to fight. Their roles are those of wives and mothers. Even if Smith was more involved, gathering usable evidence will be nigh on impossible amid the chaotic final days of the terrorist organisation.

One issue which will be examined by gardaí is whether Smith transferred money to Islamic State before leaving or while there. Any such offence would be relatively straight-forward to prove, based on bank records.

The situation leaves the Government in an invidious position. Does it attempt to rescue Smith and her child from the camp? She has yet to request consular assistance and Minister for Justice Charlie Flanagan has already ruled out sending officials to such a dangerous part of the world.

Smith may not be a sympathetic victim but her two year old is also an Irish citizen who is trapped in an extremely dangerous situation.

The Government’s choice is to either endanger its officials’ safety by deploying them to northern Syria, or to leave a mother and her two year old to make their own way home. Either option is likely to be met with significant public criticism.