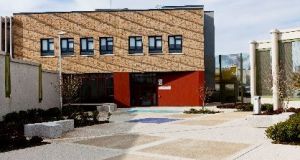 During the first quarter of 2017 there were 69 people in the Oberstown facility in north Dublin, all of them males aged 13-18.

More than half of the children detained in the State’s youth detention facility at the start of last year had lost one or both parents.

During the first quarter of 2017 there were 69 people in the Oberstown facility in north Dublin, all of them males aged 13-18.

Of these, 37 (53 per cent) had lost a parent “either through death, imprisonment or no long-term contact,” according to the facility’s annual report.

The same proportion had been in care or had “significant contact” with Tusla, the Child and Family Agency, prior to their detention.

The detainees were also far more likely to have mental health needs compared to the general youth population – 38 (55 per cent) had some form of mental health issue while 22 had been on medication at some point, almost exclusively for attention deficit hyperactivity disorder (ADHD).

The vast majority (80 per cent) had drink or drug problems. Almost as many (71 per cent) were not attending school when they were sent to Oberstown, while 25 (36 per cent) had some kind of learning disability.

There were 36 children on remand – awaiting trial or sentence – with another 33 serving a sentence handed down by the courts. Most were serving short sentences but 13 were serving a term of a year or more, while five were serving terms of more than four years.

The latest report “highlights the high levels of unmet, complex need with which they present in all areas of their lives from mental health to substance misuse, poor educational experiences to childhood trauma,” said Prof Ursula Kilkelly, chair of the board of management.

Out of the 69 children, 46 were Irish, 16 were Irish Travellers, four were from elsewhere in the EU, two were African and one was of mixed ethnicity, it stated.

The report acknowledges the difficult years faced by the facility in 2016 and 2017. In August 2016 a group of detainees rioted, causing €3.5 million worth of damage.

The High Court last year ruled Oberstown had breached the constitutional rights of five detainees by depriving them of exercise and contact with their families during periods of isolation.

Within one week in 2017 there were two more major disturbances at the facility including one incident attended by armed gardaí.

The report details several improvement measures taken by management including an implementation group established in March 2017 to act on recommendations made in previous reports.

“By the end of 2017, most of these recommendations were found either to have been implemented or were in the process of being implemented,” it stated.

There were 135 children detained in Oberstown during the entirety of 2017 of which only two were female.

1 Meath farmer discovers overnight rave on his land
2 Coronavirus: 188 new cases and no further deaths amid concern over eight counties
3 Children removed from care of parents after claims they were ‘stripped and flogged’
4 Work to stabilise land after ‘suspected tunnelling’ behind terrace could cost €300,000
5 Cork publican opts to remain closed for another two weeks
Real news has value SUBSCRIBE