Guidelines on social media use in court trials due before Christmas

Issue brought into focus by recent Jobstown and Belfast trials 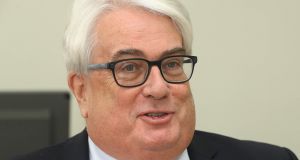 Social media guidelines are being drafted by a committee made up of the presidents of all five court divisions including the chief justice Frank Clarke (above). Photograph: Lorraine O’Sullivan/Sharppix

Irish judges are to receive guidelines within the next three months on how to deal with social media during trials.

The guidelines are being drafted by a committee made up of the presidents of all five court divisions including the chief justice Frank Clarke.

They will cover issues such as how judges should deal with prejudicial social media commentary during a live trial and how juries should be warned about looking at social media.

It is understood the guidelines will also lay out how judges should exercise their power to hold people in contempt of court for commenting on a trial online in a prejudicial manner.

The use of social media from within the courtroom will also be addressed. In recent years the practice of “live-tweeting” trials has become popular among journalists and members of the public.

There are currently no rules for the live-coverage of trials on social media except for the existing regulations designed for traditional print and broadcast reporting.

It is expected the guidelines, which will not be mandatory, will suggest a stricter approach to the use of social media, including only allowing it with permission of the trial judge or by journalists.

It is expected the guidelines will be completed before Christmas. The committee is using a working paper on the issue drafted by the former chief justice Susan Denham as a basis for its work.

On her retirement in June 2017, Ms Justice Denham called for new procedures to allow contempt of court laws to be used against those who disrupt court proceedings with social media.

“It would be naive of us not to plan for the future in this regard,” she said. “The fundamental right to a fair trial does not change in the face of any new means of communication. Rules can and must reflect the new reality.”

Minister for Justice Charlie Flanagan made similar calls: “Everyone is entitled to a free and fair trail, without outside interference.”

There are two competing views among the judiciary on the further regulation of reporting and commentary on trials. On the one hand, the courts have been taking small steps towards a more open justice system, including allowing the broadcasting of certain Supreme Court proceedings and allowing journalists access to certain documents in civil cases.

But most judges are anxious to avoid a repeat of the so-called “Jobstown trial” which saw a group of water charges protesters acquitted of falsely imprisoning then tánaiste Joan Burton by refusing to let her car move.

During the trial some of the accused and their supporters launched a social media campaign to secure their acquittal. One of accused, TD Paul Murphy, tweeted about his case from the defendants’ area of the court, drawing the ire of the judge and the prosecution.

Social media use in the context of rape trials, where the complainant is entitled to life-long anonymity, is also being considered by the committee. The issue was brought into focus this year during the trial of two rugby players in Belfast, who were later acquitted of the charges, which also attracted significant social media commentary. One man is currently before the courts in Northern Ireland accused of publishing the complainant’s name on social media.