Man held as cannabis herb worth €32,000 seized in Cork house

Man in his 20s held under drug trafficking legislation after seizure 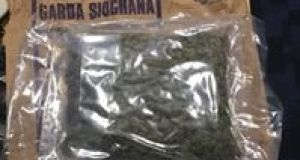 The seizure took place in a property on Magners Hill, Youghal on Wednesday evening.

“At approximately 7pm, gardaí from the Midleton District Drugs Unit carried out a search at a house in Magners Hill. During the course of the search gardaí seized approximately €32,000 euro worth of suspected cannabis herb (pending analysis),” gardaí said in a statement.

The man was brought to Cobh Garda Station where he was detained under Section 2 of the Criminal Justice (Drug Trafficking) Act 1996. He has since been charged and was due to appear in Cashel District Court, Co Tipperary.