Former president marks 50th year of Flac; says ‘we have to wake up and be very smart’ about climate crisis 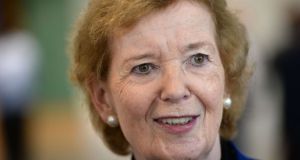 Mary Robinson: Access to justice is at the ‘very core of democracy’ and without it and the rule of law, ‘we don’t have anything’. Photograph: Dara Mac Donaill / The Irish Times

More than five billion people worldwide have no meaningful access to justice and the problem has worsened in the last two decades, former president Mary Robinson has said.

Access to justice is at the “very core of democracy” and without it and the rule of law, “we don’t have anything”, Mrs Robinson said at an event in Dublin celebrating the 50th anniversary of the establishment of the Free Legal Advice Centre (Flac).

She was addressing a gathering at the weekend including senior judges and many members of the legal profession, including former attorney general David Byrne, who was among the founding members of Flac in 1969.

Flac chief executive Eilis Barry noted 40 years had passed since Cork woman Josie Airey, represented by Mrs Robinson and solicitor Brendan Walsh, paved the way for civil legal aid here. Ms Airey took a case to the European Court of Human Rights over her inability to get legal aid to secure a judicial separation from her estranged husband.

In a public interview at the event with former RTÉ journalist Doireann Ní Bhriain, Mrs Robinson said the legal profession is conservative in many ways but her involvement with Flac had grounded her “in the reality of people’s lives”.

The founders of Flac had “the wit to realise” that, in 1969, the legal profession was not serving those who most needed its services.

Access to justice is a serious issue internationally with some 5.1 billion people having no access to justice “in any way that makes sense”. One of the United Nations Sustainable Development Goals has, Mrs Robinson noted, set out a global commitment to take more seriously the issues of access to justice and the rule of law and to make access more real at local and community level in every way.

Mrs Robinson particularly stressed the urgency of tackling the climate crisis and said Flac can be a leader at community level in relation to what needs to be done.

This is not about climate “change”, it is about a climate “crisis, an emergency”, she says.

Everyone needs to take the crisis personally in their lives and take steps including to be more energy efficient and use public transport, she said. Her message was to “get angry and get active”.

We need to get angry with those who have more responsibility for tackling the climate crisis - governments, fossil fuel businesses, agri-businesses and business generally, she said.

The “most important and hardest” thing is to imagine the world we want to get to “very rapidly.”

Such a world will certainly be healthier, she said, noting that, due to air pollution, five million masks had been issued in New Delhi last week so children could go outside.

There are also health issues relating to air quality in Dublin and London, she said.

It is no longer a matter of “picking and choosing” how we address the climate crisis, she said.

Science has kicked in and we need to listen to the science, including about rising sea levels and the predicted extinction of one million species.

Mrs Robinson said she had cried while listening to climate activist Greta Thunberg berate world leaders over stealing her childhood. She also noted the words of Pope Francis: “God forgives everyone. We sometimes forgive each other. Nature forgives no one.”

Because nature forgives no one, “we have to act”, Mrs Robinson urged.

Ireland should look to the example of New Zealand where commitments to carbon reduction have been put into law and emulate the example of the late Dave Ellis, who set up the Coolock community law centre, to spread the message about climate justice at community level.

“The smarter communities are, the more they will survive. We have to wake up and be very smart.”