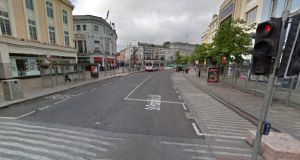 Gardaí in Cork foiled what they believe was a planned looting attack on a sports shop in the city centre on Friday night when over 100 masked youths began gathering on Patrick Street.

It is understood a group of youths from Dublin carried out a reconnaissance on the sports shop on Thursday and then urged people to turn up in Patrick Street on Friday evening dressed in black and wearing masks.

A message circulated on social media, entitled JD Cork City Robbery, said: “Location: McDonald’s at 5:30 on Friday the 8th November. Dress code: You must wear all black with bally and gloves. You only have 1 minute to yam that shop. This is at your own risk. Don’t come if you can’t run. Don’t come in uniform”.

Over 100 youths dressed in black, some carrying balaclavas, began gathering at Winthrop Street around 5.30pm, and gardaí believe they planned to storm a nearby sports shop in a bid to steal and loot.

Gardaí had learned of the planned looting, and a large number of gardaí including members of the Public Order Unit, the armed Regional Support Unit, plainclothes detectives and uniformed officers were on standby.

Gardaí believe the youths abandoned any plans to loot the sports shop when they saw the large number of gardaí on Patrick Street, and they gradually dispersed without anyone being arrested.

It is believed to be one of the first such cases of social media-organised looting in Ireland. The organisers, it is believed, were inspired by similar lootings organised on social media in a number of British cities in recent days.