‘We are one family, the disappeared now, we have all toiled to find these other bodies’ 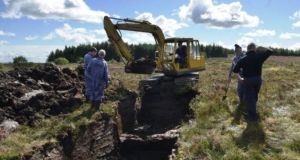 File image of a dig being carried out at the Bragan bog in Co Monaghan for the remains of Columba McVeigh. File photograph: Brenda Fitzsimons

The brother of one of the last people killed and secretly buried by republicans to remain missing has made a plea for information to find him.

Oliver McVeigh made the call as families of the 16 people disappeared during Northern Ireland’s troubled past gathered at Stormont for their annual silent walk.

Of the 16 Disappeared, the remains of 13 have been found while three remain missing.

The families of Co Tyrone teenager Columba McVeigh, former monk Joe Lynskey and Captain Robert Nairac are hopeful their bodies can be found.

Geoff Knupfer, who leads the Independent Commission for the Location of Victims’ Remains (ICLVR), walked with the families during the 13th All Souls Day Silent Walk.

Families laid a black wreath with three white lilies representing those who have yet to be found on the steps.

Mr McVeigh, from Donaghmore, Co Tyrone, was one of the first to be killed and secretly buried in 1975.

The latest search for his remains at Bragan Bog, Co Monaghan by the ICLVR ended earlier this year without success.

His brother Oliver said his family were back to the drawing board and urged anyone with information to come forward.

“This is also the anniversary of my brother’s disappearance and death,” he said.

“We are one family, the disappeared now, we have all toiled to find these other bodies and it’s nice to see people weighing in behind our family and the other two that are still missing, to say we are still behind you.

“The end of the search is heartbreaking, it’s one disappointment after another. At this stage it is back to the drawing board, going back to the republican movement and seeing.

“We can’t leave it at that, we have to keep going and they are going to have to come up with something new because he’s not where they said he was.”

The IRA is deemed responsible for most of the 16 murders and secret burials while the INLA was behind one of the disappearances.

Earlier this year, UK charity Crimestoppers announced that an anonymous donor had put up a reward of $60,000 (€55,000) for information that results in the recovery of the remains of the three outstanding disappeared victims.

Anyone with information should contact CrimeStoppers on 0800 555 111 and the untraceable anonymous online form is at www.crimestoppers-uk.org. - PA