‘Please remember Ana and keep her in your hearts’ 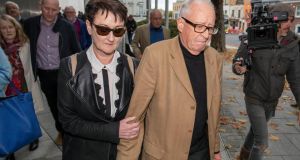 It has not been possible to establish why Ana Kriégel was murdered last year, detectives said, as her teenage killers were jailed for life and 15 years respectively.

The 15-year-old boys will spend most of the next decade in prison and possibly far longer under the sentencing regime set down by Mr Justice Paul McDermott. Boy A will serve a minimum of 12 years and Boy B a minimum of eight.

After the minimum terms expire, a judge will review their cases and may suspend all or some of the balance. They will stay in the Oberstown child detention facility until 18 years of age when they will transfer to Wheatfield adult prison.

Various reports examining the boys’ personalities and backgrounds were furnished to the court but none detailed any mental illness, personality disorder or childhood abuse which would explain why, at the age of 13, they committed murder.

The reports detail how the boys have trouble understanding the full impact of their crime but state that neither currently poses a risk to others.

Nothing in the summary of the reports read out by the judge indicated why the boys wanted to commit murder or why they selected Ana.

“Unfortunately it wasn’t possible” to establish why Ana was murdered, lead investigator Det Insp Mark O’Neill said after the conclusion of the case.

“But I think our job is to gather the evidence and present it to the court and hope then that the court will establish the why. Unfortunately that hasn’t been entirely possible as yet.”

On Tuesday, they received what are in effect the longest sentences handed down to a child under 16 in modern Irish history.

The boys’ reaction to the sentences was muted. Boy A’s mother wept quietly as her son clutched her arm. The father of Boy B put his arm around his son.

The judge said Ana’s life was of “supreme importance” and her family would suffer her loss for the rest of their lives.

“You will have to carry the guilt and shame of your involvement for the rest of your lives,” the judge told the boys.

“You have the opportunity for a future and second chance, something you so wrongfully and cruelly denied to Ana.”

“Forever is not long enough. Please remember Ana and keep her in your hearts, somewhere,” Ana’s father, Patric, said outside court afterwards.

Counsel for both boys applied for and were granted legal aid in the event of an appeal against sentence or conviction. They have 21 days to lodge any appeal.