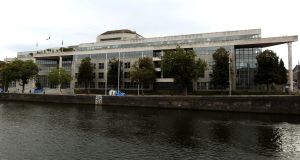 Last month the High Court was told protection money was paid by the council, and contractors working on its behalf, to west Dublin gangland figures to stop vandalism and assaults on workers at social housing sites in Cherry Orchard, Ballyfermot. Photograph: iStock

A senior barrister has been appointed to investigate if Dublin City Council was involved in making payments to criminals to stop attacks on social housing construction sites.

Last month the High Court was told protection money was paid by the council, and contractors working on its behalf, to west Dublin gangland figures to stop vandalism and assaults on workers at social housing sites in Cherry Orchard, Ballyfermot.

Minister for Housing Eoghan Murphy has appointed Patrick Butler SC to carry out a statutory review and prepare a report “to establish the role, if any, of Dublin City Council in the events which culminated in payments by construction companies to stop anti-social behaviour on social housing construction sites”.

Mr Murphy said he made the decision to appoint Mr Butler following the recent High Court case during which evidence was presented by An Garda Síochána of sums of money paid to the two defendants in the case which, in respect of at least two of three social housing construction sites, was so-called “protection money” to stop anti-social behaviour.

In carrying out his independent review Mr Butler will examine all relevant files and documents held by the council as well as interview council officials and other relevant parties who were involved in the construction projects.

Mr Butler has been given a deadline of December 9th to submit his report to the Minister .

Mr Murphy said he was “extremely concerned by the matters that came to light” during the court case.

“ Local authorities must be able to provide urgently needed social housing, in particular in disadvantaged communities, without interference or obstruction by criminal elements. There must at all times be full oversight, transparency and accountability in the local authority system to ensure that public funding is used for the purposes for which it is intended,” he said.

“The idea that a public body and public money might be dispersed in respect of criminal behaviour shocked many so we must get to the bottom of this and find out the truth.”

He said he was confident Mr Butler had the required expertise to “promptly review these matters and establish the truth of what transpired in these particular cases.”