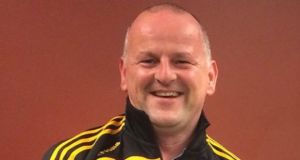 In a statement on Wednesday, Liverpool said it was ‘looking forward’ to hosting Mr Cox and his family at Anfield on Sunday to watch Liverpool play Manchester City in a top of the table Premiership clash.

Liverpool manager Jurgen Klopp has described last year’s vicious attack on Irish fan Seán Cox by a rival supporter outside Anfield as the “lowest point” in his four years at the club.

Father-of-three Mr Cox, from Dunboyne, Co Meath, is travelling to the stadium this weekend for the first time since he suffered a brain injury in an unprovoked assault by a masked AS Roma supporter ahead of a Champions League tie in April 2018.

Mr Klopp said it will be one of the highlights of his time managing the side.

“When it happened to Seán, it was really the lowest point for me in my whole time at Liverpool,” he said.

“The love, obviously, that Sean has and his family have for this club and for football — I hope it gave them all strength and support in the recovery time. We all know it is not finished yet and there is still a long way to go.”

After almost 18 months of treatment in Ireland, Mr Cox (54) recently moved to a specialist neurological facility in the north of England for a 12-week rehabilitation programme, focussed on developing his speech and movement.

In a statement on Wednesday, Liverpool said it was “looking forward” to hosting Mr Cox and his family at Anfield on Sunday to watch Liverpool play Manchester City in a top of the table Premiership clash.

“We can give him the opportunity to come back to watch a really big game — and that he wants to do that — that for me, coming from a really low point, is one of my highlights since I have been here,” Mr Klopp said on Friday.

“Because it is so nice and I’m really looking forward to it and I hope we can organise that I can see him for a couple of minutes before the game — I really want to.”

The Premiership boss said he hopes both Mr Cox and his family feel the support for them from the entire Liverpool community.

“We don’t only sing You’ll Never Walk Alone, we really live that,” he said.

“In this situation it was very important to show that and I really hope that they felt that the whole time, and will feel it in future when we can help him with his recovery as well.”

Earlier this year, a “legends” charity match in Dublin raised €748,000 for the Seán Cox Rehabilitation Trust.