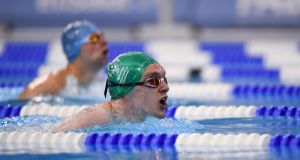 Ireland’s Jack McFadden, from Dublin, on his way to winning a Gold Medal in the 200m breaststroke on day four of the 2019 Special Olympics World Games in Abu Dhabi. Photograph: Ray McManus/ Sportsfile

Ireland enjoyed another day of medals at the Special Olympic World Games on the fourth day of competition in Abu Dhabi, United Arab Emirates.

In the pool Dubliner Jack McFadden won gold in the 200m breast stroke event watched by his family.

Oisin Feery, Tullamore, Co Offaly, took the gold in his kayak in the 200m sprint, saying it was an honour to represent Ireland and win the title while doing so.

Feery also claimed bronze in the 500m race, with Michelle O’Keane taking silver, Fergal Gregory bronze, and Deirdre O’Callaghan winning another bronze, all in the 500m.

O’Callaghan was also in 200m action and she took silver in her race.

Gary O’Sullivan from Castleisland, Co Kerry, was back in action after his shot put gold medal on Sunday and yesterday he claimed silver in the 400m race walk.

Alan Power from Knocklyon, Dublin, was in action in the 5,000m and claimed a bronze medal.