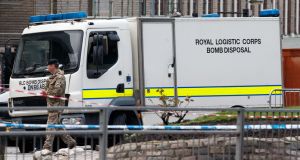 If the claim of responsibility by ‘the IRA’ for last week’s incendiary devices in Britain proves genuine the parcel devices would represent the latest in a series of high-profile attacks by the group.

Security sources, who believe the New IRA was indeed responsible, have told The Irish Times that about 200 dissident republicans on the island of Ireland are regarded as active security threats.

However, they stressed that what one termed “softer participation” in dissident republicanism was engaged in by a higher number.

Sources believe the New IRA, formed in 2012, was the largest dissident group, adding its members were a mix of older people who been members of the Provisional IRA and younger dissidents, some of whom were only infants, or not yet born, when the Belfast Agreement was signed in 1998.

The New IRA is strongest in Derry and is effectively a combination of several groups, including the Real IRA and Republican Action Against Drugs; the latter specialising in beating and kneecapping suspected drug dealers.

And while it is a much smaller group than the Provisional IRA, with far less public support and a much weaker capability, the New IRA made its mark through a campaign of violence, up to and including murders.

“We’d say they are lingering and looking for opportunities,” said one source. “Something like Brexit certainly has the power to galvanise them and spur them on, especially if there was ever a hard border to attack.”

Another source said that, for example, any future significant dip in support for Sinn Féin in parts of Belfast or Derry because of a disillusionment with mainstream republicanism may result in higher numbers of people, predominantly young men, drifting towards extremism.

As well as the incendiary devices sent to Britain last week, the New IRA was responsible for a car bomb in Derry in January. It was also regarded as stirring unrest in Derry last summer when young people clashed with the PSNI.

It murdered prison officer David Black (52) in Co Armagh in 2012. Another prison officer, Adrian Ismay, died after a New IRA bomb exploded under his car in 2016. And Michael McGibbon (33) bled to death in 2016 in a punishment shooting gone wrong in 2016.