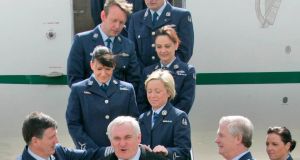 Then taoiseach Bertie Ahern before boarding the Government Jet at Casement Aerodrome in April 2008 with Lisa Smith on the extreme right. Photograph: Colin Keegan/Collins

The Irish woman detained in Syria on suspicion of association with Islamic State has been identified as Lisa Smith, a 38-year-old former Defence Forces member.

Ms Smith moved to Syria, via Tunisia, in 2015 shortly after leaving the Air Corps where she worked as a flight attendant on the Government jet and a driver to senior officers.

She had previously served with the Army as part of the 27th Infantry Battalion.

Details of an Irish woman in Syria first emerged after a TV crew working for ITV News visited a camp in northern Syria two weeks ago.

They interviewed a woman wearing a burka who claimed to be British but had an Irish accent. She was part of a group of people fleeing the town of Baghouz in Northern Syria, the last significant Islamic State, also known as Isis, hold-out in the country.

The town is currently under assault by the US-backed Syrian Democratic Forces (SDF) causing thousands of civilians and Islamic State members to flee the area.

In the ITV video the woman said she came to the country because she wanted to live “in a Muslim country and environment.” She said that conditions were very tough but that Isis is “not over yet.”

On Sunday, sources confirmed the woman in the video is Lisa Smith. It is understood Ms Smith and her two-year-old child initially went to a temporary refugee camp set up for fleeing civilians before being moved to a detention area by SDF forces.

The father of the child is a UK national who was recently killed while fighting for Islamic State. It is believed Ms Smith married this man while living in Islamic State controlled territory but it is not clear if she provided any further support to the terrorist group.

Ms Smith from Dundalk, Co Louth, left the Defence Forces in 2011 shortly after joining the Muslim faith. It is understood she then became radicalised over time, mostly through Facebook.

She departed for Tunisia around 2014 before moving to Syria in 2015.

Minister for Justice Charlie Flanagan said on Sunday he believes Ms Smith is keen to return home to Ireland and that “every effort will be made by Irish authorities to ensure she gets home.”

He said the Government is unlikely to send officials to Syria to assist Ms Smith due to the dangerous security situation there.

Former Taoiseach Bertie Ahern recalled her being on the government jet. He said: “She was a lovely lady, always very engaged and very interested. And if she is the lady I’m thinking about she was a very nice person, a very fine person and always a very engaging person”.