How is Europe dealing with the return of Isis jihadists? 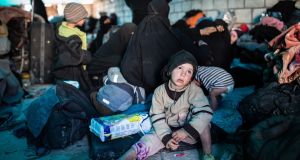 Children at the al-Hawl camp, which is saturated by civilians fleeing Baghouz, the last pocket in Syria held by Islamic State. Photograph: Laurence Geai/Le Monde

Unlike many western European countries, the State has taken a relatively benign approach to the question of what to do with jihadists returning from Syria and Iraq.

A small number of Irish residents and citizens – authorities put the figure at about 40 – have travelled to the Middle East in the last six years, either to support Islamic State or fight against it.

Some of these have already returned under the radar, with gardaí either unaware of what they did while overseas or unable to prove they engaged in anything which could be considered an offence.

Some have died, including Khalid Kelly, who blew himself up in Iraq during a suicide attack for Islamic State.

The so-called caliphate of Islamic State, also known as Isis, in Iraq and Syria is almost finished. An all-out assault on its final strongholds in northern Syria by the Syrian Democratic Forces has resulted in the capture of hundreds of fighters and their suspected sympathisers, at least two of whom – Lisa Smith and Alexandr Ruzmatovich Bekmirzaev – are Irish citizens.

The highly publicised captures of Smith and Bekmirzaev has forced the Irish Government to clearly state what it intends to do with jihadi supporters who wish to return home.

So far the message has been clear: such people have a legal right to return to Ireland and will be allowed to do so.

“But it’s not just as simple as coming here, and everything proceeding as if nothing had happened. But ultimately this is an Irish citizen and we don’t believe that removing an Irish citizen’s citizenship from her or her family, rendering them stateless, would be either the right or compassionate thing to do.”

Speaking after the capture of Bekmirzaev, a Belarusian-born naturalised Irish citizen, the Taoiseach said the same thing – our citizens “shouldn’t be someone else’s problem”.

The Government position stands in stark contrast to that of the British Home Office, which, after intense pressure from the public and the tabloid press, recently revoked the citizenship of Shamima Begum, a British teenager who travelled to join Islamic State when she was 15.

The Irish stance may be influenced by the fact that, unlike Britain, we have yet to suffer an Islamist extremist terror attack, meaning reaction to the cases of Smith and Bekmirzaev has been less intense here.

But the State also has no choice but to take them back. Unlike other EU countries, we have not introduced any legislation specifically targeting those who travelled to join Islamist terrorist organisations.

There is a mechanism in place to strip citizenship from naturalised citizens who have dual nationality, such as Bekmirzaev.

This mechanism has been on the statute book for more than 60 years, but it is only recently the Government has actually started to utilise it.

Last year Minister for Justice Charlie Flanagan moved to strip Irish citizenship from Ali Charaf Damache following his conviction and imprisonment in the US for supporting Islamist terrorism. This year it will attempt to do the same to dozens more foreign-born people who the State alleges fraudulently gained citizenship or broke their oath of loyalty to the State.

This system is slow and subject to legal challenge at every stage. Despite being locked in a high-security prison in America, Damache has already lodged a case in the High Court arguing the Government has no power to take his citizenship.

However, unlike Damache, he has not been convicted of any crime. And due to the chaotic situation in northern Syria, the ability of authorities either here or in that country to gather the evidence necessary for a conviction is highly doubtful.

There is even less chance of stripping citizenship from Smith, firstly because she was born in Ireland and not naturalised, and secondly because she cannot claim citizenship of another country. The State is a signatory to a UN treaty preventing it from making people stateless by stripping their citizenship.

Some of those who have already returned from Syria and Iraq are now under Garda surveillance. Both Smith and Bekmirzaev can expect the same if they return, but it is unlikely they will face further punishment.

The response of the Irish Government to Smith’s case led to accusations it was soft on the issue. In the following days politicians tried to toughen up the rhetoric somewhat, with Flanagan suggesting Smith might yet face serious charges here.

But as of now, this is unlikely. Despite her apparent sympathies, there is no evidence she has committed any offence. As the Taoiseach stated last week, “going to Syria or going to live in what was called Islamic State is not in itself an offence or a crime”.

If there are to be charges, they are likely to centre on providing financial support to a terrorist organisation, something which is a specific offence. However, as of now there is no evidence to support even this relatively minor charge.

The children, three boys and two girls between the ages of one and five, were flown to the military base at Vélizy-Villacoublay, outside Paris. The rescue mission was so secret that fewer than five government officials were informed in advance.

The dramatic return of the orphans was an exception “in view of the situation of these very young and particularly vulnerable children”, the foreign ministry said.

An estimated 100 French children and 50 adults, mostly women, remain in three Kurdish-run refugee camps in Syria. The numbers are likely to rise when Isis’s last holdout falls in Baghouz.

According to the World Health Organisation, 29 infants have died of exposure in the largest camp, al-Hawl.

“Regarding adult French citizens, combatants and jihadists who followed Islamic State in the Middle East, the position of France has not changed,” the foreign ministry’s statement said. “They must be judged on the territory where they committed their crimes. It is a question of security and justice.”

French authorities make no distinction between citizens who joined Isis, which is a crime, and those who simply went to live in the so-called caliphate. “There is no programme for the return of jihadists,” president Emmanuel Macron said last month. “If they come to France, they will be imprisoned,” interior minister Christophe Castaner has said.

More than 250 people have been killed in attacks claimed by Islamic State in France since 2015. Returning jihadists, it is felt, can never be trusted. “Compared to the perceived risk, the principles of law, liberty and even the death penalty count little for our compatriots,” the authors of the report wrote.

French human rights lawyers have filed complaints with the UN, demanding that France “assume its responsibilities and protect its children at risk of famine and imminent death”.

On March 10th, they published a petition which has since been signed by thousands of people, including prominent lawyers, politicians, journalists, actors, writers and publishers, asking that French children in the camps be repatriated.

“None of them chose to be born in the zone or to join Islamic State,” the petition says. “They are the victims of choices made by adults. They are the victims of war. In two months, the number of women and children detained at al-Hawl has risen from 10,000 to 33,000. The children lack water, food and care . . . These children will become time bombs if France persists in refusing to repatriate them.”

Deputy interior minister Laurent Nuñez said France does not intend to repatriate the children of jihadists, because Paris has entrusted its citizens to the custody of the Kurdish-led Syrian Democratic Forces.

Macron said the plight of the French children in Syrian Kurdistan would be dealt with “on a case by case basis”.

Few cases illustrate the complexity of returning jihadists better than that of Derya, a 25-year-old woman who left her native Germany to marry an Islamist terrorist.

After difficult teenage years – problems at school and with her Turkish-German family, followed by a Hell’s Angels boyfriend who forced her into prostitution – she met Mario Sciannimanica on Facebook in 2014.

A German convert to Islam and an Islamic State jihadist, Sciannimanica told her about his life in Syria and, two months later, she travelled to Turkey to be smuggled over the border.

She fell for him at first sight – “looking lovely in fatigues, with a weapon and beard” – and then came their wedding night.

“We were staying in a former torture chamber, chains were hanging from the roof, there was still blood on the walls,” she told the tabloid Bild.

With her marriage came a full burqa and, in 2015, their first son. After constant fights the couple broke up. She refused a marriage proposal from a notorious German rapper and Isis fighter and instead became the second wife of Belgian Isis commander Abu Salahuddin.

“That was lovely until he was hit by a drone and died two months later,” she said. She returned to Sciannimanica, now living in Iraq, until he was picked up, interrogated and executed by Isis as a suspected spy. “What bad luck I have with men,” said Derya later, “they all die in my hands.”

In 2017, she was deported from Turkey back to Germany with her son. She insists she was never interested in Isis ideology but, after regular searches by armed police, she was detained last November and is now facing charges of suspected membership of a terrorist organisation.

She is one of some 1,050 German citizens the federal interior ministry says left the country since 2013 to Isis war-zones in Syria and Iraq. One-fifth of the total were women. About 200 are now dead, while 350 have returned to Germany.

Berlin is facing pressure from all sides to act since US president Donald Trump’s demand for countries to take back their Isis-linked citizens. In the case of Germany, about 190 citizens are either sitting in prisons in the region or contained by the SDF.

Germany is facing a delicate balancing act between legal obligations and political expediency.

In one corner are terrorism experts, including at the UN, who have warned that Isis returnees, including women, should be placed under intense observation.

But many returnees who have been charged on their return receive low, single-digit prison terms, with some even getting suspended sentences. And Germany’s highest administrative court has placed restrictions on just how authorities can deal with returnees from Isis-controlled territories of Syria and Iraq.

German judges have ruled that women who simply took care of the household or children in Isis-controlled territories did not commit a criminal offence.