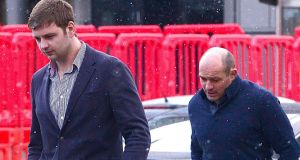 A picture from last week showing rugby players Ian Henderson (left) and Rory Best outside Belfast Magistrate’s Court. Court was told Mr Best attended the hearing because he was instructed to be present by lawyers involved in the case. Photograph: Pacemaker

Ireland rugby captain Rory Best attended the trial of fellow rugby players Paddy Jackson and Stuart Olding last week because he was legally instructed to do so, Laganside Crown Court in Belfast heard on Monday.

Mr Jackson and Mr Olding are on trial for the alleged rape of a 19-year-old Belfast student at Mr Jackson’s home in east Belfast in June 2016. They deny the charges.

At the outset of Monday’s hearing there was legal discussion of media reporting of how Mr Best attended the trial last Wednesday.

The court was told Mr Best attended the hearing because he was instructed to be present by lawyers involved in the case. The matter was raised by lawyers for the defence.

It was agreed that this fact should be reported by the press.

Judge Patricia Smyth also told the jury of nine men and three women that the “the only reason he was in court was because he was directed to be here by senior counsel”.

The judge said to the jury they may “have been aware of press coverage about the attendance at this trial of Mr Rory Best” while adding that it may have been “hard” for them not to be aware of this coverage.

They all deny the charges with Mr Jackson and Mr Olding contending that the sex was consensual.

The second week of the trial began at midday on Monday. The trial is expected to last about five weeks.

The Irish Rugby Football Union and Ulster Rugby have said Mr Jackson, who has played 25 times for Ireland, and Mr Olding, who has four caps, will not play again until the trial is concluded.