Retired chief superintendent claims he was not source of false allegation 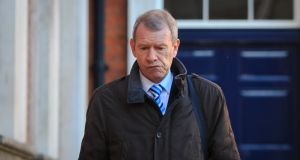 Retired chief superintendent Colm Rooney: said while he had signed a letter before it was handed to the commission, he had only done so in relation to “the paragraphs that related to me”. Photograph: Gareth Chaney Collins

A former chief superintendent has said he was not the source of an incorrect allegation made about Sgt Maurice McCabe at the 2015 O’Higgins Commission.

Colm Rooney was giving evidence at the Charleton tribunal about a letter drafted in May 2015 which the tribunal chairman, Mr Justice Peter Charleton, has characterised as akin to a “charge sheet” against Sgt McCabe.

Mr Rooney said any contribution he made towards the letter “was factually correct”.

When tribunal counsel Kathleen Leader said the letter had been drafted after instructions from Mr Rooney and Supt Noel Cunningham, Mr Rooney responded: “I don’t share that view.”

Mr Rooney is claiming legal privilege over his dealings with the legal team at the commission. It is understood Supt Cunningham, who is due to give evidence on Monday, is also claiming privilege.

Mr Rooney said that while he had signed the letter before it was handed into the commission, he had only done so in relation to “the paragraphs that related to me”.

The letter was drafted over the weekend and handed into the commission on the morning of Monday, May 18th, 2015, after a row over whether the legal team representing the Garda Commissioner could challenge the motivation of Sgt McCabe.

The commission was set up to investigate complaints made by Sgt McCabe about policing and other matters. The legal team representing the then commissioner, Nóirín O’Sullivan, was also representing a number of officers against whom Sgt McCabe had made complaints. These included Mr Rooney. The commission ruled that the complaint against him was unfounded and said the same was true of a complaint that could be implied against Supt Cunningham.

The letter drafted to support the legal team’s right to challenge Sgt McCabe included an error that implied bad faith on the part of the sergeant. The error came to light in later hearings at the commission after Sgt McCabe produced a secret tape he had made of a meeting he had had with Supt Cunningham in Mullingar in 2008.

As well as the letter containing the error, the commission had also been supplied with a report of the meeting drafted by Supt Cunningham and which contained a correct record of the meeting and accorded with the tape.

The tribunal is investigating whether a false sex assault allegation, or other unjustified grounds, were used by Ms O’Sullivan at the commission to discredit Sgt McCabe.

Mr Rooney apologised for a circular he had posted in all Garda stations in the Cavan/Monaghan area in July 2011, following the completion of an inquiry into complaints of poor policing by Sgt McCabe.

The inquiry was conducted by former assistant commissioner Derek Byrne and Chief Supt Terry McGinn. Mr Rooney said he was visited in his office by Mr Byrne and told of the outcome of the inquiry and had written the circular on this basis. He had not seen the Byrne/McGinn report.

However, he now realised that what was expressed in the circular was not appropriate and that its statement that there had been a vindication of policing standards at Bailieboro station was not warranted.

“I just believed what I was told about the outcome,” he said. Mr Rooney retired later in 2011. The tribunal heard that it was only a few days ago, when Mr Rooney’s statement to the tribunal was circulated, that Sgt McCabe first learned that the circular was written without Mr Rooney having seen the Byrne/McGinn report.