Authority tells Garda to carry out review of 41 misclassified homicides 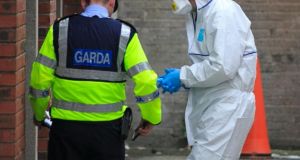 The Policing Authority has publicly criticised senior Garda management over its handling of the controversy around misclassified homicides.

It has also told the Garda it must carry out a wide ranging review to be sure that any homicides incorrectly classified as a less serious offence was still investigated in full as a homicide.

The controversy has arisen around 41 domestic homicides. Some of the crimes were incorrectly classified, in some cases as non fatal offences against the person.

News that 41 cases had been misclassified emerged last year. The Policing Authority has expressed its frustration on many occasions about delays in the Garda clarifying the matter.

And in a statement today it reiterated those concerns.

“The pace at which this issue has been addressed by the Garda Síochána has been frustrating for the Authority, in particular the delay in getting comprehensive information on the matter,” the authority said.

“In early April 2017 while it became apparent that there was misclassification of data, the extent was not clear.

“Indeed the lack of information and certain tensions between different services within the Garda Síochána were publicly played out during the Authority’s meeting on April 27th and in the media in the days following that meeting.”

The authority asked for a report on the issue early last year. Information was supplied by the Garda to the authority before the public meeting of the authority in April.

However, the information was supplied late the night before the meeting, meaning it could not be reviewed. And there were also concerns about the quality of the information supplied.

“Do you have a thing called a report that has a start and an end that we could have a copy of?” authority chair Josephine Feehily asked the senior Garda team at the April public meeting.

She was addressing a senior Garda team on the day led by the then Garda commissioner Nóirín O’Sullivan.

In its statement on Thursday, after problems around the homicide data surfaced in media reports in recent weeks, the Policing Authority set out its position and once again vented its frustration.

Some of the recent media reporting appears to have confused two homicide-related issues being dealt with by the Policing Authority.

One relates to the 41 misclassified cases of domestic homicides - people killed at home - that emerged in a review of all homicide cases between 2013 and 2015.

In many cases when multiple victims died, only one of the deaths was record as a homicide.

It its statement today the authority noted the Garda had been asked by it several times to confirm that full homicide investigations were carried out into those domestic killings that were incorrectly recorded and classified on the Garda’s PULSE database.

And the Garda had responded each time that full and proper investigations had been conducted and that the classification errors had now been resolved.

“At no time has the Garda Síochána demurred from that position,” said the authority today of the Garda’s repeated assurances all homicides were investigated in full.

However, the Policing Authority has told the Garda to carry out a review in the 41 incorrectly classified domestic homicide cases to ensure the proper investigation was carried out each time.

“The Authority is seeking to understand and confirm these Garda assurances,” it said of its request for a full review to ensure all homicides were properly investigated.

“But questions remain from information and reports received by the authority to date,” it added of conflicting information being supplied to it in two tranches last year; in April and September.

“These questions have been explored in detail during many meetings with the Garda Síochána and will continue to be explored until the Authority’s questions are answered satisfactorily.”

The authority has also told the Garda to carry a review to ensure that when court cases in the higher courts are concluded, the records on PULSE for the offences before the courts have been updated with the court case outcomes.

“A court outcome may require a reclassification within a homicide, for example from murder to manslaughter and this updating is essential to ensure accurate classification,” the authority said in its statement today.

The authority, at its public meeting on February 22nd, said it would ask the senior Garda team about the problems relating to the homicide data.