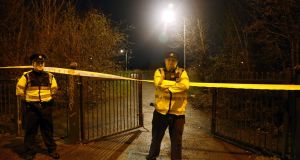 Gardai preserve the scene where the suspected getaway vehicle used in a fatal shooting at James Larkin House, North Strand was found in a park off the Alfie Byrne Road. Photograph: Colin Keegan/Collins Dublin.

A man shot dead in Dublin on Tuesday night was questioned about his alleged role in a gun killing four years ago.

Gardaí are now trying to establish if his murder was linked to the previous fatal gun attack.

Jason Molyneux, a 27-year-old father of one, was shot outside his home at James Larkin House, a north inner city flats complex, at about 9.45pm.

He had over 120 criminal convictions and was currently on bail for a series of offences.

Molyneux was associated with the Hutch family and was a very close friend of Derek Coakley Hutch (27), who was shot dead in west Dublin last Saturday week.

The funeral of Coakley Hutch - the 14th victim of the Kinahan-Hutch feud - was due to take place on Wednesdday.

Molyneux had been at his friend’s wake on Buckingham Street Upper close to his own home just before he was gunned down last night.

He had returned home when he was ambushed. Gardaí suspect he may have arranged to meet somebody he trusted when he was shot dead.

Molyneux’s life was at risk in the Kinahan-Hutch feud because of his association with the Hutch family.

However, gardaí suspect that another feud, which predates the Kinahan-Hutch dispute, may be the reason for Molyneux’s murder.

Specifically, they are trying to establish if Molyneux’s killing was revenge for the murder of Michael Devoy (41), Balbutcher Drive, Poppintree, Ballymun, Dublin 15, in January 2014. He was shot dead the day after his release from a short prison sentence.

He was the chief suspect for shooting at a group of people leaving a party at a Dublin pub in 2013. Nobody died in that shooting but a well-known criminal suffered a head wound and a several bystanders were injured.

While Michael Devoy’s murder remains unsolved, gardaí believe criminals now linked to the Kinahan-Hutch feud killed him in revenge for shooting one of their number outside the pub the previous year.

Michael Devoy had been warned on release from prison that his life was in danger. As a result, he was wearing a bullet proof vest when shot.

He was lured to a meeting place in west Dublin and shot in the head and neck before his remains were dumped by a roadside in Tallaght.

Jason Molyneux was a suspect in the killing and he was questioned by the Garda. He was released without charge and was never charged in relation to the murder.

However, Devoy’s Ballymun-based associates blamed him for involvement in the killing. And gardaí are now trying to establish if Molyneux was shot by that Ballymun faction.

However, Garda sources said it was also possible Molyneux’s murder was linked to the Kinahan-Hutch feud.

The dispute involving criminals from Ballymun is completely separate to the Kinahan-Hutch feud. However, some men close to the Hutch family are now effectively involved in both feuds.

Last summer the feud in Ballymun sharply escalated when relatives of Michael Devoy were shot outside at house in Ballymun.

Mother-of-six Antoinette Corbally (48), and Clinton Shannon, a 30-year-old Dubliner, were killed in the attack last August.

They were shot dead outside the Corbally family Ballymun home in an attack intended for Ms Corbally’s brother Derek “Bottler” Devoy (38). He escaped uninjured.

Gardaí suspect the men behind the attack last August were the same criminal faction – among them Molyneux and other men close to the Hutch family – who killed Michael Devoy in 2014.

If Molyneux’s murder is confirmed as being part of the Ballymun dispute, it would be further evidence that feud has sharply escalated. It would be the second shooting in less than a week linked to it.

Last Friday night, a convicted armed robber was wounded in a shooting outside the National Stadium on the South Circular Road.

The victim, who is in his 40s, was leaving a boxing tournament at the stadium when he was shot at and chased down the street. He was wounded in the leg but survived.

Like Jason Molyneux, the man is closely associated with the Hutch family and was in danger because of the Kinahan-Hutch feud.

However, he was also involved in the separate feud with the Ballymun faction. Gardaí believe he was shot by his Ballymun-based enemies.