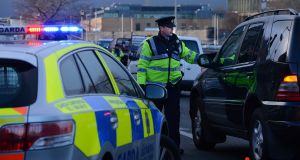 Up to the start of November 2017 just 1,856 gardaí had received training to carry out new drug-detection tests, out of 13,551 members of the force. Photograph: Cyril Byrne/The Irish Times

Just 58 motorists have tested positive for the presence of drugs at garda mandatory roadside checkpoints over eight months, amid slow progress in training gardaí to administer the new tests.

Four months after the intoxicant checkpoints had been introduced in April last year, only 13 motorists had tested positive. The most successful month for positive detections of motorists driving under the influence of drugs was August, where 15 motorists were caught at roadside tests.

Up to the start of November 2017 just 1,856 gardaí had received training to carry out the tests, out of 13,551 members of the force, according to figures obtained through a parliamentary question from Independents 4 Change TD Tommy Broughan.

While he was provided with the number of positive tests, he was not told how many roadside drug tests in total had been carried out.

Gardaí had estimated they would carry out 50,000 tests a year, according to the specifications of the contract to supply mouthpieces for the tests.

There is significant concern within An Garda Síochána at the relatively low level of detections under the new roadside tests.

A senior Garda told The Irish Times there was a problem with the legislation providing for roadside drug testing, and that the testing devices were proving cumbersome to use.

“The numbers, after eight months, are very low and we are concerned,” the officer said.

“There is a lacuna with the legislation. The law as it is currently drafted limits our scope when we bring someone back to the station on foot of a positive result on the device”.

The officer said the legislation required a driver to fail the roadside test and also an impairment test before a prosecution could be taken with any confidence.

He also said gardaí carrying out a roadside test for drugs can have difficulty getting a usable saliva sample from a motorist. “I have seen this first hand, the driver is nervous, their mouth dries up and it is very hard to secure a sample.”

The testing devices also do not work when the temperature is below four degrees.

Speaking recently in a Dáil debate Independent TD Mattie McGrath said he had been sent a photo of the roadside testing equipment by a garda working in a rural station, which had a “do not use” sign on the box.

“It was drug testing equipment but it could not be touched because none of the gardaí had been trained to use it,” McGrath said.

Tommy Broughan was critical of the low number of positive tests from the Garda checkpoints. “There clearly is an issue with resources. We haven’t been prepared to put in the money to train up gardaí in every station,” he said.

Susan Gray, chair of road safety awareness group PARC, was critical of the “fanfare” championing the tests when they were announced, compared to the actual follow through in training gardaí to use the devices. “The training should have been done before the new law came in,” she said.

The contract for the testing equipment was awarded to medical firm Dräger UK, and was worth an initial €1.8 million excluding VAT, according to documentation obtained under the Freedom of Information act.

The total cost over the course the contract will be significantly higher, as the initial figure does not include the cost of purchasing additional mouthpieces for the kits each year.

The Garda press office provided no reason for the positive roadside drug tests being low so far.