Fitzgerald ‘did not hear McCabe sex-abuse allegations before justice role’ 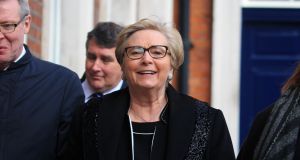 Frances Fitzgerald has told the Charleton tribunal she had not heard any rumours about a sex-abuse allegation against Sgt Maurice McCabe prior to her becoming minister for justice in May 2014.

On her second day in the witness box, Ms Fitzgerald said she had an early meeting with the Garda whistleblower after her appointment, “probably against department advice”.

She said she wanted to meet Sgt McCabe and learn the position he was in directly from him. She was appointed minister for justice in May 2014, following the resignation of Alan Shatter. Up to then she was minister for children.

Responding to Paul McGarry SC, for Sgt McCabe, she said she had not heard any rumour that might have been “swirling around” in 2014 about a sex-abuse allegation that had been made against Sgt McCabe before her appointment as minister for justice in May of that year.

The tribunal is investigating whether then Garda Commissioner Nóirín O’Sulliva used unjustified grounds to discredit Sgt McCabe during the 2015 hearings of the O’Higgins commission, which sat in private.

More generally it is investigating whether a smear campaign was conducted against the sergeant by senior Garda management.

Ms Fitzgerald said she learned about the allegation against Sgt McCabe after she became minister for justice as it featured in a process, the Independent Review Mechanism, that the department was working on at the time.

Sgt McCabe was the subject of an historical child sex abuse allegation made in 2006 by Ms D, the daughter of a Garda colleague.

The Director of Public Prosecutions (DPP), in its decision on the case, expressed scepticism about the allegation and formed the view that even if it was true, it would not constitute a crime.

During the proceedings of the O’Higgins commission, which investigated complaints made by Sgt McCabe, Ms O’Sullivan’s legal team wanted the commission to explore the view that Sgt McCabe’s motivation in making complaints might have been affected by matters linked to the Ms D allegation.

In particular, they wanted to explore the effect on Sgt McCabe of his unsuccessful efforts in 2007 and 2008 to have the full view of the DPP released to the family of Ms D.

As was the practice at the time, the family was only told that there was not sufficient evidence to justify charges being brought.

The chairman of the commission, Mr Justice Kevin O’Higgins, ruled the matter could not be explored in evidence but that witnesses would be allowed assert their view that the sergeant had a “grievance”.

Ms O’Sullivan’s legal team was also representing a number of senior officers against whom Sgt McCabe had made complaints that were later deemed unfounded. The lawyers’ consultations with these officers led to their deciding that they had to challenge Sgt McCabe’s motivation.

Ms Fitzgerald said she had a clear view that once the O’Higgins commission had been established it was not proper for her to interfere as minister in its proceedings.

She said she could not recall an email she received on May 15th, 2015, which referred to a row that had arisen at the commission about the approach being taken by Ms O’Sullivan’s legal team in relation to Sgt McCabe.

However, Ms Fitzgerald said she was in a general sense clear that it would have been inappropriate, and perhaps illegal, for her to get involved. She had made a conscious decision not to get involved.

Late last year the Government almost fell as a result of the disclosure of the May 2015 email’s existence. Ms Fitzgerald resigned from Government to diffuse the crisis.

The witness told Diarmuid McGuinness SC, for the tribunal, that after the commission’s report was published in May 2016, there were media reports based on leaks that indicated that a different approach had been taken at the confidential hearings of the commission by Ms O’Sullivan in relation to Sgt McCabe, to the position that was being adopted by her in public.

As part of the ensuing crisis she met with Ms O’Sullivan who, she said, told her she had never instructed her legal team to accuse Sgt McCabe of malice, as had been suggested in the media reports.

Notes of the meeting show Ms O’Sullivan said there was “complete confusion” between malice, integrity and motivation.

The tribunal has heard that Ms O’Sullivan’s counsel confirmed to the commission at one stage it was asserting malice, and questioning Sgt McCabe’s motivation and integrity.

However, it was later stated by Colm Smyth SC that this was a mistake on his part, and that while the motivation and credibility of Sgt McCabe were being challenged, it was not his instructions to challenge Sgt McCabe’s integrity. He also told the judge it was he, the judge, who had used the word malice.

Ms Fitzgerald was asked why she had questioned Ms O’Sullivan in May 2016 about the approach she had taken at the commission hearings but had not done so in May 2015, on receipt of the controversial email.

“I think it is a completely different context,” she said. For a minister to intervene in the proceedings of a commission of investigation would be inappropriate and possibly illegal. Asking questions of the Garda Commissioner after the O’Higgins report had been published, was “completely different”.

Her evidence continues and is likely to end this afternoon.