McCormacks demanded €510 from Brazilian woman when she handed in notice 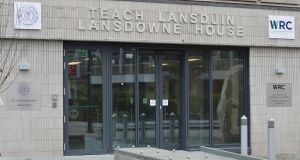 The €4,947 award by the Labour Court more than triples the €1,444 award made by a Workplace Relations Commission adjudication officer. File photograph: Alan Betson/The Irish Times

The Labour Court has found that a Dublin couple made an unlawful demand of €510 from their Brazilian au pair when she told them that she was leaving her post.

In two separate rulings, the Labour Court has ordered that Bernardine and Thomas McCormack reimburse the €510 to their former au pair, Dayana Jonson Goncalves Generoso.

It also ordered them to pay an additional €4,947 after finding she was paid an effective hourly rate of €2.78.

The cases were taken on Ms Generoso’s behalf by Migrant Rights Centre Ireland and its director, Edel McGinley, said the awards uphold justice and vindicates the rights of au pairs as workers.

The €4,947 award more than triples the €1,444 award made by a Workplace Relations Commission (WRC) adjudication officer.

That award and the €510 award had been appealed by the McCormacks to the Labour Court.

Ms Generoso worked for the McCormacks from February 29th, 2016, to July 13th, 2016, and she was paid €150 a week and provided with board and lodgings. The McCormacks had recruited Ms Generoso through the AuPair Ireland agency.

Ms Generoso gave two days notice that she would be leaving her post to the McCormacks after they returned home from holiday with their children in July 2016. With the assistance of an interpreter, Ms Generoso said that due to the conditions of her work, she decided to resign.

In evidence, Mr McCormack told the court Ms Generoso was told at the start of her employment she was obliged to give four weeks’ notice and therefore he informed her she was required to hand over four weeks’ pay in lieu.

Mr McCormack said he sought €540 and Ms Generoso said she was only in a position to give him €510 and he accepted it. Ms Generoso said that as she had only €480 on her she had to borrow €30 from a friend who was collecting her.

The court heard Ms Generoso was left without any money after paying Mr McCormack. He told the Labour Court he was aware it was all the money she had.

Mr McCormack said he asked Ms Generoso to sign a form indicating the money had been paid in lieu of four weeks’ notice.

In its ruling, the Labour Court found it was satisfied that the €510 payment was not consented to by Ms Generoso.

The court found she “was unaware that she had no obligation to meet the respondents’ demand for four weeks’ pay in lieu of notice and in all the circumstances, the court is satisfied that it was a demand for an unlawful payment”.

Mr McCormack said that he did not realise he was entering an employment relationship with Ms Generoso and had he known, he would have complied with his employment law obligations. He accepted that Ms Generoso was not paid a rate of pay in accordance with the national minimum wage.