McCabe felt it was ‘open season’ after Callinan’s ‘disgusting’ comment 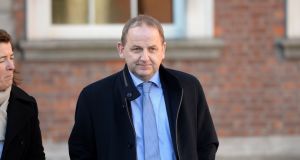 Sgt Maurice McCabe felt it was “open season” on him once former Garda Commissioner Martin Callinan had described his whistleblowing actions as “disgusting,” the Charleton tribunal has heard.

The tribunal is investigating matters to do with the treatment by Garda headquarters of Sgt McCabe and on Monday was examining a meeting in 2015 between Sgt McCabe and the Garda director of human resources John Barrett.

The tribunal was told Sgt McCabe said during the meeting the majority of staff at his station treated him properly, but that from the time Mr Callinan made his remarks, “a number of the Mullingar station party felt they had support for their actions to ‘take out Maurice’.”

According to a note of the meeting made by Mr Barrett, who is giving evidence to the tribunal today, Sgt McCabe said once this remark was made “it was open season”.

Mr Barrett is being questioned by his counsel, John Rogers SC, who took him through the content of the note from the 2015 meeting.

Mr Callinan made his controversial remark about Garda whistleblowing activity being “disgusting” to a Public Accounts Committee meeting in January 2014 and it led to calls for Mr Callinan to consider his position.

During his meeting with Mr Barrett in 2015, Sgt McCabe outlined his reasons why he believed change was essential for An Garda Síochána.

Accelerated recruitment to the force during 2004 to 2008, had led to many “duds” joining, he believed.

The Garda Representative Association was a “real problem”, the note said. “If a sergeant says put your tie on, it’s bullying.” Discipline was gone, he said.

The note recorded Sgt McCabe discussing his difficulties in the workplace and how he was only sleeping two hours a night. It was Mr Barrett’s first meeting with Sgt McCabe and they discussed Sgt McCabe’s views at length.

“I found Sgt McCabe to be credible. I found what he said made sense.”

He was different to the man who had been described to him pre-meeting, he said, and had not come to the meeting “armed” with his solicitor.

After the meeting Mr Barrett had to drive somewhere but took part over the phone in a lengthy meeting that included top figures from Garda HQ, including the then Commissioner Nóirín O’Sullivan.

The meeting was held to discuss the meeting with Sgt McCabe. “He deserves an Oscar or else we should listen carefully,” Mr Barrett said at one stage in reference to the sergeant.

Everyone involved in this the meeting was trying to resolve the Sgt McCabe issue, Mr Barrett said.

Controversy linked to the issue of Sgt McCabe has contributed to the loss of position of two Garda Commissioners and two Ministers for Justice, and late last year almost led to the collapse of the Government.

That crisis was resolved when the then tánaiste, Frances Fitzgerald, resigned from cabinet. Mr Barrett is continuing his evidence.