George Nkencho shooting: Inquiry will look at graduated use of force 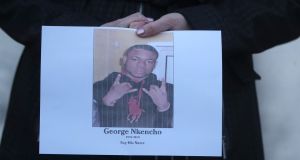 Much of the final hour of George Nkencho’s life was filmed, with the videos shared around social media and WhatsApp groups despite pleas from his family.

There is a video of Mr Nkencho walking back from assaulting a member of staff in a supermarket in Hartstown, a line of Garda vehicles following slowly behind.

There is the 13-second footage, filmed from about 500m away, of the fatal shots being fired by gardaí as Mr Nkencho, who had been carrying a knife, appears to lunge at them.

And there are the videos, taken from a upstairs window, of paramedics trying to save his life before moving him in an ambulance.

The prevalence of footage has led many, including public representatives, to pass judgment on the actions of gardaí or the deceased, even before the investigation by the Garda Ombudsman Commission (Gsoc) had started.

One of the strongest reactions came from the Nigerians in Diaspora Commission, an office of the Nigerian ministry of foreign affairs. It called the shooting “callous and wicked” while also calling for patience pending the investigation.

In a world of quickly reached judgments, many questioned why gardaí could not have shot Mr Nkencho in the legs instead of the chest.

“If you have to shoot you’re taught to shoot at the target at its largest.” In most cases this is the torso. Gardaí are taught to shoot to stop the threat, not to kill, she says. Unfortunately, the outcome is often the same.

Investigators will also examine how Mr Nkencho could have been hit with a Taser twice and still pose a threat. However, Brady – speaking generally and not about the details of this case – says Tasers are not “magic weapons”.

Like pepper spray, they often fail to work in time. “It could not connect properly or it could depend on the adrenaline of the person or if there are drugs involved,” she says.

This is borne out by a largescale study by the US department of justice that found Tasers only worked 60 per cent of the time. In 19 per cent of cases, it connects but is simply “ineffective” in stopping a suspect.

Judging the legality or otherwise of a fatal police shooting based on mobile phone footage is not a useful exercise, says Brady. “You don’t have the pre-context of the recording and you only see it from one angle.

“You don’t hear what is being discussed. Even if it’s a minute-long video, you’d want to be a very poor expert to make an assessment based on it. You could have another video from a different angle which tells a different story.”

Anger erupted after the fatal shooting, with friends and family gathering at a Garda cordon shortly after Mr Nkencho was taken away by paramedics. Protests followed over the next three days, culminating in a vigil at the GPO yesterday.

The vast majority of protesters were peaceful. A small group attempted to gain entry to Blanchardstown Garda station before being told to move back by fellow protesters.

Scattered public order incidents followed, including outside the Hartstown Eurospar where Mr Nkencho had attacked the manager. A small group of young people banged on the shutters as staff and customers hid inside.

Gardaí have said they will police these protests as they have other events that have taken place during Covid-19 restrictions. People will be advised they are breaching Government regulations and the organisers will be investigated at a later date.

A more immediate goal is to work on relations with African communities in west Dublin. “There’s not exactly riots out there. It’s not that bad,” says a senior Garda source. “But our diversity officers have been very active in engaging with community leaders and pastors out in the area in the last few days. And they in turn have been working with us to try and manage it.”

Obi Odemena, leader of the Igbo union of Dublin, of which the Nkencho family were members, appealed for calm. “We must be peaceful. We can only achieve our goals with peaceful methods.”

But he said Irish Nigerians in west Dublin are extremely angry. “We are grieving as a community.” Mr Odemena says there is a dearth of updates from gardaí and that a meeting he had with the superintendent in Blanchardstown yielded little information.

Sunny Okague says Mr Nkencho used to come watch his son play football on the green. “My son told me he was a very cool dude. That he is not dangerous or aggressive. His only crime is that he was mentally ill.”

Garda sources have confirmed Mr Nkencho was known to suffer from mental illness and that officers have been called to the house several times to deal with “mental health and domestic issues”.

The Gsoc investigation is likely to examine to what extent gardaí at the scene knew of Mr Nkencho’s mental problems. It will also look at whether the Armed Support Unit officers properly employed the graduated use of force.

A graduated response means determining the risk involved in a given situation and the range of options available, such as pepper spray, Tasers and verbal commands, says Brady. The goal is to mitigate the threat using the minimum use of force necessary. However, if the threat increases, so too will the response by officers.

“These decisions can be made in seconds,” Brady says. “Ideally the choice of response helps buy time, if at all possible.”

The Gsoc investigation is unlikely to result in a publicly released, comprehensive report into Mr Nkencho’s death. Details of such investigations typically only emerge if a case goes to trial.