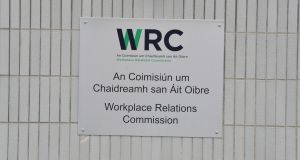 Chief Commissioner of the IHREC, Sinead Gibney stated that Yvonne O’Rourke was treated by the Defence Forces “as if she were a man who had been on long-term sick leave rather than as a pregnant woman”. Photograph: Alan Betson / The Irish Times

The Workplace Relations Commission (WRC) has ordered the Minister for Defence to pay €117,814 in compensation to a former female captain in the Air Corps.

WRC adjudication officer, Stephen Bonnlander has made the maximum possible compensation after finding Yvonne O’Rourke was victim to gender discrimination arising from “an unacceptable systematic failure” in the Defence Forces.

After a seven-year battle by Ms O’Rourke, Mr Bonnlander found she was discriminated against on gender grounds in her efforts to secure promotion.

Based at Baldonnell Aerodrome, Ms O’Rourke asserted the Defence Forces discriminated against her on the ground of her gender, in that it treated two maternity leave absences from work as equivalent to the sick absence of a male officer, and consequently gave her a poor performance rating.

The poor rating for 2010 and 2011 impacted on Ms O’Rourke’s ability to go on a mandatory training course which was required to advance to the rank of commander.

By the time Ms O’Rourke was approved by the general officer commanding of the Air Corps to attend the Junior Command and Staff Course (JCSC), her health had deteriorated to the point that she was unable to take up the opportunity and was later retired from the Defence Forces on the grounds of ill health in July 2016.

In a hard-hitting ruling, Mr Bonnlander stated “It beggars belief that women should have been serving in the Irish Defence Forces for decades, without the Forces’ systems and instruction ever having been appropriately updated to ensure they reflect anti-discrimination law as it applies to pregnancy and maternity”.

The hearing at the WRC for Ms O’Rourke’s case against the Minister for Defence spanned six days.

In the long-running action, Ms O’Rourke was represented by the Irish Human Rights and Equality Commission (IHREC), which instructed a senior and junior counsel in the case.

Speaking today, Ms O’Rourke stated: “I hope that what has been achieved in this outcome and determination will shine some light on the areas of darkness that needed to be revealed within the Irish Defence Forces.

Ms O’Rourke, who joined the Defence Force in 1991 as a cadet, added: “I hope that this small victory will somewhat; smooth the path, pave the way forward, and inspire those left behind, to have their difficulties, hurts, issues and problems of; discrimination, victimisation, bullying, harassment and sexual harassment heard and subsequently addressed in a more expedient fashion than my seven-year struggle.”

Chief Commissioner of the IHREC, Sinead Gibney stated that Yvonne O’Rourke was treated by the Defence Forces “as if she were a man who had been on long-term sick leave rather than as a pregnant woman”.

She stated: “This discriminatory perspective was enabled by there being scant reference to discrimination in the Defence Forces handbook and absolutely no reference at all to pregnancy-related discrimination.

Ms Gibney added: “Today’s ruling has unequivocally spotlighted major systems failures in the Defence Forces’ dealings with its personnel who are pregnant or on maternity leave and has shown that discriminatory actions cannot be cured without acknowledging them first.

Ms Gibney further stated: “The IHREC expects the Defence Forces to now act within the given timelines to ensure the necessary information and training are put in place to guarantee women in the forces are not penalised or discriminated against for having children whilst serving their country.”

Mr Bonnlander stated he was making the maximum award as the discrimination spanned two absences on Ms O’Rourke’s maternity leave and its detrimental effect on her overall health.

Mr Bonnlander has also ordered the Defence Forces to pay interest on the award dating back to May 2013 in order to compensate Ms O’Rourke for the enormous delay to the investigation and hearing of this matter as the Defence Forces did not withdraw its jurisdictional objections earlier than the closing arguments at hearing.

He said the delays which occurred in Ms O’Rourke’s retirement on grounds of being medically unfit to continue to serve left her in a very precarious financial situation, since at the time, she had neither her salary, nor her pension, and because her employment had not officially come to an end, no opportunity to look for other work.

Mr Bonnlander stated Ms O’Rourke was also the main breadwinner for her family.

Mr Bonnlander also ordered the Defence Forces to carry out measures to combat pregnancy-related and other discrimination with all such work to be complete by December 2021.

In his findings, Mr Bonnlander described how the relevant handbook for Defence Forces staff is “remarkable for two details: The provisions on sexual harassment run to a full 1½ pages, three times the length of what it has to say on discrimination, and pregnancy-related discrimination is not mentioned at all”.

He stated: “It seems that, even though women have been serving in the Defence Forces since 1979, the possibility of sexual misconduct exercised senior commanders’ minds much more than the notion that women could be disadvantaged or discriminated against because of pregnancy.”