George Nkencho death: ‘I just want justice for my brother’ 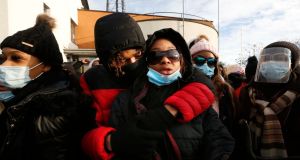 The brother of George Nkencho, Emmamuel, pictured in the red jacket console’s his sister as they joined protesters outside Blanchardstown Garda Station in Dublin on Thursday. Photograph: Leon Farrell/RollingNews.ie

Around 200 people gathered outside Blanchardstown Garda Station on Thursday morning calling for “justice” following the shooting of George Nkencho outside his home in Clonee in West Dublin on Wednesday.

The 27-year-old was shot at least three times by members of the Blanchardstown Garda Armed Support Unit (ASU) while allegedly brandishing a knife and threatening gardaí. A video shot by a passerby, which showed a man in a blue jumper surrounded by ASU members, captured the sound of one initial gunshot followed by four more shots.

The man appears to stumble before falling to the ground on the fifth shot. At least three of the shots hit Mr Nkencho who received first aid at the scene and was taken by ambulance to James Connolly memorial hospital where he was later pronounced dead.

Chants of “justice for George” echoed around Blanchardstown station on Thursday as a number of speakers took to a makeshift stage calling for “transparency” from the Garda Ombudsman Commission (Gsoc) investigation into the shooting. Attendees also committed to continuing their protest outside the Blanchardstown station for the next 14 days. Thursday’s protest was mainly peaceful aside from a small scuffle which broke out outside the station’s entrance during the speeches.

Emmanuel Nkencho, Mr Nkencho’s younger brother who briefly spoke to the crowd, told The Irish Times his family was “traumatised” by the shooting. “The past 24 hours have been hell,” said Mr Nkencho, who watched the incident unfold from inside his home.

“I have no brother now, he was the eldest in the family. I have to take care of my mum now. I just want justice for my brother.”

He said his bother had a “kind heart” but had “suffered from mental health issues” in recent years. “He didn’t really go outside, just to the shop and back. He has his little friend group and that’s it. My brother never bothered anybody, he just got on with his own life.”

Mr Nkencho said he would like to speak directly to gardaí to ask them questions about Wednesday’s shooting. “Why couldn’t more than 15 gardaí disarm one man?,” he asked. “Until I know why, I will not be at peace.”

Princess Toyin Ogunwusi, a family friend, said Mr Nkencho’s mother Blessing was doing “horribly” and still would not accept the news of her son’s death. “The shock is too much for her. The shooting happened right in the family’s presence, they actually have a recording of it. It will be in their memories for the rest of their lives.”

Israel Ibanu, who played soccer with George at the Insaka Glentoran Football Academy for four years, described his friend as a “quiet and reserved” young man who was “dedicated to football”. He said Mr Nkencho started to drift from his football group after his close friend Toyosi Shittabey was stabbed to death in 2010. “There were no supports for him and he started to fade away from our group. He didn’t have anyone to speak to about what he saw happen to his friend.”

Mr Ibanu described the news of Mr Nkencho’s death as “surreal”. “It was the last thing I would imagine would happen to George, that he would be shot by a garda.

“It feels impossible that this happened in Ireland. We see the shootings in America and say thank god for this peaceful country that we live in, that would never happen here. But now it’s happened and it’s the worst feeling.”

Obi Odemena, leader of the Igbo union of Dublin, said the local community was struggling to come to terms with the shooting. “We just can’t make sense of what happened yesterday. I’ve been in this country more than 21 years and this is the first time we’ve had an incidence of one of our people being killed at the hands of the police. When people heard about the shooting their first reaction was ‘in Ireland’?”

Young people affected by George’s death should be given time and space to grieve, he said. “We know nothing can be achieved through violence and we will be calling on the youth ensure everything is done peacefully towards obtaining justice for George.”

Sunny Okague, a member of Clonee’s Irish-Nigerian community and whose sons live in the same estate as the Nkencho family, said he echoed the protest’s calls for the “immediate suspension” of the Garda who led Wednesday’s operation and the Garda who carried out the shooting. “We would also like transparency in the investigation and for the community to be carried alone,” he added.

On Wednesday, the Garda said in a statement it implemented “a graduated policing response” after being threatened with a knife. It is understood this involved the use of pepper spray followed by the firing of two Taser guns. Gardaí also verbally ordered the deceased to drop the knife several times before using force, one source said.

The incident began just after midday when, according to eyewitnesses, Mr Nkencho entered the Eurospar supermarket in Hartstown were he punched a manager in the face, injuring the victim’s nose. Mr Nkencho then produced a large knife from his pocket and brandished it towards staff.

He then walked into the post office section of the supermarket as unarmed gardaí began to arrive. The supermarket manager was taken to hospital for treatment.

At least 12 unarmed gardaí followed Mr Nkencho out of the shop and through several housing estates while instructing him to drop the knife.

By the time Mr Nkencho arrived in his front garden at 12.30pm, the ASU had arrived from Blanchardstown Garda station and took over the operation. This is when the fatal shots were fired.

Gardaí have obtained a video taken of the shooting which will be passed on to investigators from the Garda Ombudsman Commission (Gsoc).