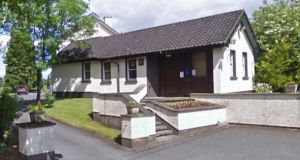 A detailed examination is unlikely to take place before Tuesday as what remains of the single-storey building must first be declared safe to enter.

Gardaí have appealed for anyone with CCTV or dash-cam footage of the area, which is very close to the Border, to contact them.

The Garda unit working at the station on Monday had finished its tour, and there was no one inside at the time.

The alarm was raised close to 5am, and when gardaí and the fire brigade arrived flames were coming up through the roof.

The station was based in a bungalow but works were done to it in recent times and it is understood to have been in good repair.

It was not open full time, and one Garda sergeant and four gardaí were stationed there; they will now have to be reassigned, possibly to Monaghan Garda station.

Emyvale is on the main Dublin to Derry road, and approximately 6km south of the Border; the next main town is Aughnacloy, Co Tyrone.

Gardaí have launched an investigation to establish the cause of the fire, and carried out door-to-door inquiries in the village.

A case conference was also held, and while the cause could be accidental it is understood that the possibility it could be malicious cannot be ruled out until the full technical examination is carried out.