Biggest increases in recorded drug crime are outside Dublin 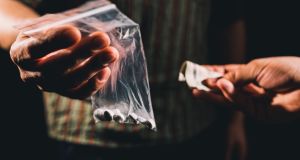 In Cobh, Co Cork, the number of crimes has increased in each of the past four years to 64 last year, more than double the 19 offences recorded in 2015. File photograph: Getty

The biggest increases in recorded drug crime countrywide are occurring outside Dublin as the drugs trade is now buoyant after the recession.

Garda sources believe higher disposable incomes among recreational drug users are the main driver behind the rise in drug crime along with availability of narcotics to meet demand.

In 2016 recorded drug crime increased by six per cent, followed by five per cent in 2017 and nine per cent last year before growth accelerated in the first half of this year.

The number of offences in the first half of this year nationally, at 10,900 drug crimes recorded, was 20 per cent higher than the same period last year.

An analysis of drug crimes recorded in each Garda station across the Republic over the four-year period from 2015 to the end of last year reveals rising drug crime trends in regional Ireland while the increases in Dublin are more modest.

Naas, Co Kildare, has also experienced a near trebling of recorded drug crime since 2015 to 149 offences last year. Recorded drugs offences in Carlow increased by 90 per cent to 326 crimes last year.

Sligo Garda station has witnessed a near doubling of recorded drug crime in four years; up by 85 per cent to 173 offences last year.

In Co Mayo, Ballina and Castlebar have also experienced increases, but from a lower base. The trend is up 130 per cent at both stations over the past four years; to 63 crimes in Ballina last year and 74 in Castlebar.