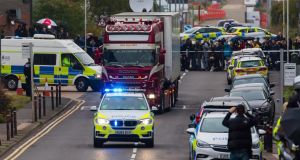 Police drive the lorry container along the road from the scene in Grays, Essex, last Wednesday. It is not yet known when the victims entered the trailer, where temperatures can be as low as -25 degrees. Photograph: VIckie Flores/EPA

An Irishman suspected of taking part in the trafficking of 39 migrants who were found dead in a trailer in Essex last week is expected to be handed over to the UK authorities in the coming days.

The suspect, who is aged in his 20s and from Northern Ireland, was arrested by in a large Garda operation involving immigration officers, organised crime detectives and the Emergency Response Unit on Saturday afternoon as he disembarked a truck from an Irish ferry.

Gardaí believe he had spent the previous three days in France and had disposed of his phone before travelling to Dublin.

Essex Police are seeking the man in relation to the deaths of the 31 women and eight men, many of whom are believed to have been trafficked from Vietnam.

He is suspected of transporting the trailer to the Belgian Port of Zeebrugge from where it was loaded on to a ferry to the United Kingdom.

The man is being held in Irish custody in relation to separate offences.

Also on Saturday, Northern Irish truck driver Maurice Robinson (25) was charged with 39 counts of manslaughter and conspiracy to traffic people over the deaths.

Another three Irish people arrested on Friday in connection with the deaths were released on bail on Sunday. Essex Police said a couple, both 38, from Warrington, arrested in Cheshire on Friday and a man (45) from Northern Ireland arrested at Stansted Airport later the same day had been freed following two days of questioning.

Police believe the truck cab driven by the man arrested by gardaí on Saturday is the same one that brought the trailer to Zeebrugge. It has been taken to a Garda vehicle depot in Santry, Dublin, where a preliminary examination has been taking place in consultation with UK police.

The cab is registered to Irish haulier Ronan Hughes, who also leased the trailer where the bodies were found.

A European Arrest Warrant for the arrested man’s detention in relation to the Essex deaths has already been issued and is expected to be executed by gardaí in the coming days, meaning the suspect will be transferred into the custody of the UK authorities.

It is understood the Garda have already granted UK police permission to voluntarily question the man while he is in Irish custody. The Belgian police also wish to speak to him.

The man faces relatively minor charges in Ireland but it is expected the Garda will hand him over to the UK authorities. It is open to the man to challenge the arrest warrant in court.

Officers initially believed all the dead were Chinese nationals, but a representative of VietHome – a website for Vietnamese people in the UK – said it had passed on the pictures of almost 20 people who have been reported missing to police.

Police said they were investigating a “wider conspiracy” after claims surfaced that the lorry could have been part of a convoy of three carrying about 100 people. Efforts to identify the 39 victims are continuing.

It is not yet known when the victims entered the trailer, where temperatures can be as low as minus 25 degrees if the fridge is activated, or the route it travelled.

Det Chief Insp Martin Pasmore of Essex Police has urged members of the Vietnamese community in Britain and abroad to help identify the victims.