Cocaine in Ireland: ‘The average consumer is a farmer or nurse... It’s universal’ 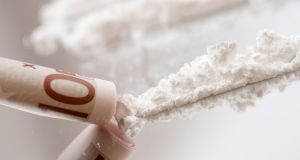 According to the Health Research Board’s newsletter, cocaine use has now “returned to Celtic Tiger levels in Ireland”.

It is an assertion that will come as little surprise to publicans, gardaí or anyone who has gone on a big night out recently and noticed revellers heading to the bathroom a little too often.

The 2018 Cross-Border Organised Crime Assessment, a joint initiative by the Irish and Northern Irish security services, backs this up, stating that if cocaine use has not yet returned to its peak, it will in the near future.

However, according to gardaí, doctors and drug treatment workers there is a significant difference between the cocaine situation in 2007 and in 2019. While before the problem was largely confined to cities or large towns, today cocaine is being used in even the smallest village in rural Ireland.

The cliche of cocaine as the drug of choice for the Dublin finance worker or the middle-class dinner party is long out of date. The average consumer “is a farmer or a nurse”, according to one garda. “Actually there isn’t an average consumer. It’s universal. That’s how bad it is.”

A quick look at any regional paper bears this out. “A Letterkenny garda has described the drug problem in the town as ‘rampant’,” reads an article in the Donegal Democrat.

Last month’s Western People warns: “Cocaine use in Mayo is threatening to spiral out of control, a meeting of the Joint Policing Committee for the county has heard.”

“We are undoubtedly hearing of it being used more on a recreational basis,” says Sean O’Connor, co-ordinator for the HSE’s North West Regional Drug and Alcohol Task Force. “It’s come into the larger towns here like Sligo and Letterkenny and also into the smaller villages. If you asked my colleagues in the west or in the midwest they would say exactly the same thing. It is becoming a norm for people going out for a big weekend.”

People are also consuming it for other purposes, Mr O’Connor said. “If people are going out drinking for a long time they are using cocaine to keep themselves going.”

The drug does not carry the same taboo it once did, he said. “People seem to be more open about it, whereas many years ago it would be a substance you would use quite secretly.”

Dr Jason van der Velde, an emergency medicine specialist based in west Cork, said there is now almost a greater stigma surrounding alcohol than there is in relation to cocaine.

“Before people who came into emergency departments were quite cagey about how they got injured. Now they quite openly say I was off my head on cocaine and this is what happened.”

Gardaí say cocaine is still being imported into Ireland by a handful of large gangs such as the Kinahans, who wholesale it down the line. It could go through four or five dealers before making it into the hands of the end user in rural Ireland. With each step it is likely to have been mixed with other substances to increase its bulk.

“It’s cut with all sorts of thing. Baking powder, rat poison,” said Dr van der Velde. “So it’s a Russian roulette when you’re taking it. The one thing we know is it’s never pure.”

According to the Road Safety Authority, 37 per cent of motorist caught drug-driving test positive for cocaine and eight per cent of road death victims between 2013 and 2016 had the drug in their system.

Overdose deaths from the drug have doubled since 2010, while cocaine is now the drug most commonly found in the system of those who take their lives through hanging.