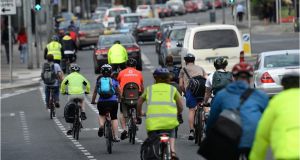 At least two convictions have been secured against motorists so far this year. Photograph: Dara Mac Dónaill

A new law to combat dangerous overtaking of cyclists, with stiff fines and penalty points for motorists, is to be introduced next month.

Earlier this year a proposed law to set a minimum passing distance for drivers overtaking cyclists was scrapped after the Attorney General raised concerns. The proposal would have made it an offence to pass a cyclist closer than 1m on roads with a speed limit under 50km/h and within 1.5m on roads with a limit of 50km/h or higher.

Attorney General Séamus Wolfe expressed reservations about the enforceability of legislation. His concerns were understood to centre around the difficulty in measuring such a distance for the purposes of prosecuting motorists.

Minister for Transport Shane Ross is expected to use secondary legislation to introduce the new overtaking law, meaning he can use his own powers to introduce it, and it can be operated immediately by gardaí. A spokeswoman for the Department of Transport said the law would “specifically target those drivers who put cyclists at risk”.

“I had very much backed the minimum distance proposal and it was very disappointing when it wasn’t introduced. Even if the new law doesn’t specify a distance, it would mean there is a specific reference to cyclists and dangerous overtaking in law.”

Mr Fox became involved in cycle campaigning following the death three years ago of his sister, Donna, who was struck by a lorry as she was cycling to work in Dublin city.

“I jumped into campaigning to try to help, obviously for personal reasons initially, and I would say I was like the average person, a bit uninformed and a bit ill-informed. But I started meeting with cycle activist groups and campaigners, and I would particularly credit Phil Skelton and Cahir O’Higgins, who have long campaigned for a minimum passing distance.”

Mr Fox said he believed Mr Ross had been genuinely disappointed not to have brought in minimum passing distance laws earlier this year.

“While progress has been slow I do have to give credit to Shane Ross who seems to be listening perhaps more than other ministers in the past. Legislation is not the holy grail, but it does focus minds so motorists have to think about cyclists when they are overtaking.”

In addition to detection of the offence by gardaí on the road, video footage supplied by cyclists could potentially be used to secure convictions against motorists for dangerous overtaking.

At least two convictions have been secured against motorists this year, one for dangerous driving and the other for careless driving, where video evidence supplied by cyclists was instrumental.

In one case a van driver was fined €250 after he pleaded guilty to dangerous driving. Video footage had been entered into evidence of a driver endangering a cyclist by passing too close. In a second case, a driver was convicted of careless driving and fined €750 after a cyclist supplied footage of a van travelling towards him on his side of the road as it overtook another van.

The Road Safety Authority (RSA) has an ongoing campaign recommending motorists maintain minimum passing distances of 1m on roads with a speed limit under 50km/h and within 1.5m on roads with a limit of 50km/h or higher.