One driver caught speeding every three minutes in Garda operation 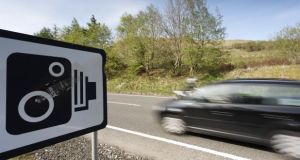 Drivers were caught speeding at a rate of almost one every three minutes during a country-wide Garda operation to warn motorists to slow down.

Some 255 vehicles were detected travelling in excess of the speed limits between 7am and 7pm on Friday as part of National Slow Down Day.

The widespread deployment of roads-policing gardaí targeting about 1,000 locations nationally with speed cameras runs for 24 hours. Final figures will be available on Saturday.

The top speed detected on the first day of the crackdown was on the M1 at Lusk, in north Co Dublin, where a motorist was caught doing 181km/h on the 120km/h motorway.

Some of the other speeds detected by the GoSafe vans fitted with speed cameras on Friday morning included:

National Slow Down Day; Gardaí & GoSafe have checked the speed of 55,035 vehicles with 131 vehicles detected travelling in excess of the speed limit. Gardaí & @RSAIreland continue to remind drivers of the dangers of speeding & urge motorists to slow down pic.twitter.com/DOfc5LhA9U

As well as the increased speed-detection measures, the Garda and Road Safety Authority are also running a media campaign to urge drivers to slow down.

As of October 16th this year, there have been 117 road fatalities, an increase of five on this date last year.

A total of 95,998 speeding detections have been made between January and August 2019, some 15 per cent higher than the 81,598 detections made during the same period last year.

Chief Superintendent Paul Cleary from the Roads Policing Bureau said the day was important because “roads deaths are significantly higher than this period last year”.

“With the darker, wetter weather approaching, vulnerable road users such as pedestrians, cyclists and motorcyclists will be at higher risk over the coming months,” he said.

“While most drivers abide by the speed limits, there has been an increase of 15 per cent in detections to date in 2019 compared to 2018. It is also very disappointing to see some drivers detected driving considerably over the speed limit,” he added.

“What a driver considers small increases in their speed could be the difference between life and death for such vulnerable road users,” Ms Murdoch said.

“A pedestrian or cyclist hit by at 60km/h will only have a 1 in 10 chance of survival, however if hit at 30km/h, 9 out of 10 will survive.This is especially true in vulnerable road-user rich environments like towns and cities.”

‘Give him time,’ mother urges court about severely brain-injured child

‘He is not able to talk but he has a heartbeat and a pulse,’ says woman opposing palliative care for son