Additional Garda patrols outside mosques to reassure members of the community 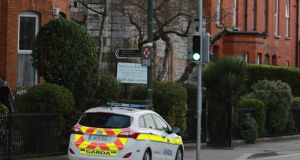 Gardaí responsible for monitoring several websites and online personalities with a history of spreading racism and inciting hatred among Irish web users have noted a recent increase in activity.

Many of the websites are based in the US making combating them difficult due to strong freedom of speech protections in that country, said Insp David McInerney of the Garda Racial, Intercultural and Diversity Office (Grido).

Others frequently change their names and IP addresses, making monitoring much more difficult.

“There are certain groups out there who like to stir up racial hatred and we have to be watching that all the time,” he said.

“These are certain individuals who come up time and time again. We know people who are at this all the time. They move on, they change the name of the site and then they start again.

“They’re inciting hatred, just trying to get people’s back up all the time,” Insp McInerney said, following a spate of online racial abuse directed at the Black-Irish community in response to reports of anti-social behaviour by groups of black youths in west Dublin and Meath.

Grido was primarily responsible for liaising with members of minority communities to ensure their safety as well as training frontline gardaí on how to police minorities fairly and effectively, he said.

In response to the mass shootings at two New Zealand mosques on Thursday, Grido contacted the Imams of each mosque and Muslim centre in Ireland to ask if they had any security concerns. Additional patrols were organised outside some mosques including in Blanchardstown and Clonskeagh to reassure members of the Muslim community.

A garda source with knowledge of the unit’s work said that while such sites had been in existence for years, they had become more numerous and active within the past three years since Brexit and the election of Donald Trump in the US.

The sites promote far-right and anti-minority messages including a conspiracy theory known as “the great replacement”, which claims the Government is attempting to replace Irish people with immigrants.

“We know for a fact it’s the same people behind them. The servers are in the US. It’s nearly impossible to try to prosecute because they are outside the jurisdiction.”

Such sites had been in existence, under various names, for over a decade, he said. “But I think for the most part, as of yet, they’re not being taken seriously in Ireland thankfully.”

Meanwhile, Insp McInerney said there had been some violence resulting from online hate speech and it was a concern, “but not a massive concern yet”.

Referring to the suspected arson attempts at proposed direct provision centres in Moville, Donegal and Rooskey in Roscommon, Insp McInerney said it was important not to jump to conclusions.

In the aftermath of both incidents, some internet users posted publicly that more centres should be targeted, with some lamenting they weren’t occupied at the time.

“The Roscommon one hasn’t been proven yet. I’m in touch with the superintendent there and there is still not enough evidence to say it was racially motivated,” Insp McInerney said.

“There are all these groups inciting hatred but no major gangs out there perpetrating serious crime against minorities so far.”

European Network against Racism Ireland (Enar) said it had also seen a rise in far-right extremist rhetoric online. It is one of a number of civil society organisations monitoring such activity.

“Certainly in the last year there has been proliferation of groups and there has been growth in the likes and shares they are getting on social media,” said the group’s national co-ordinator, Shane O’Curry.

He said “without wanting to overstate it” these groups have increasingly displayed a level of co-ordination in their talking points.

“There are common themes like talk about the great replacement, cultural Marxism and an invasion of Islam. There is something really worth being seriously concerned about with these groups.”

Last year an Enar report stated there had been a steady rise in reports of hate speech and racially motivated assaults. It also said there was a lack of faith among minorities in the ability of the gardaí to combat this trend.

Hate speech is illegal under the Prohibition of Incitement to Hatred Act 1989. However, the legislation is rarely used. Figures from 2017 showed only five people had been charged under it in 30 years.

Mr O’Curry called it “unworkable legislation” particularly when it comes to online hate speech. “We’re urging the gardaí to take action against figures like these for incitement to hatred. Unfortunately, the laws are very weak.

“The Department of Justice and An Garda Síochána have admitted to us privately there is a huge gap in our ability to respond to hate speech.”