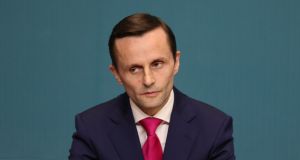 The State has a “Rolls Royce system” for commercial law but when it comes to family law, there is “an impoverished system”, the special rapporteur on child protection has said.

Dr Geoffrey Shannon has urged “ambitious and fundamental” reform of the family law system so that “people most in need of accessing the legal system have the best possible system available to them”.

Dr Shannon was addressing the Oireachtas Justice and Equality committee on Wednesday on reform of the family law system and EU legislative proposals.

“I would argue what we have is a specialised commercial court system. We’ve a Rolls Royce system for commercial law yet when it comes to the family law system which affects every citizen in this State, we’ve an impoverished system - where we have the most vulnerable members of our society trying to access a system which really doesn’t have the capacity to meet their needs,” he said.

Dr Shannon noted the intention to establish a specialised family and children’s court “but the necessary detail, resources, and implementation are now needed in order to make those plans a reality”.

He said cuts to legal aid have led to proceedings which are more drawn-out, more difficult to resolve and “where adequate support is lacking”.

Dr Shannon said courts have a duty to hear children and give due weight to their wishes.

“There is a distinct lack of provision in Ireland for hearing children. Guardians ad litem (a person appointed by the courts to establish the wishes of the child) are often the most effective mechanism in which children can present their views to the courts, yet they may or may not be appointed in a given case,” he said.

Eilis Barry, chief executive of the Free Legal Aid Centres (FLAC) said the work of the Legal Aid Board is hindered by long delays in the provision of a legal aid to prospective clients.

“I found the building to be - and the entire experience to be - rather shocking. It was filled with people, many of whom are in a very vulnerable position, a lot of people from very marginalised communities,” she said.

“It’s commonplace for people to have to engage in consultations with their solicitors in the hallways and on the stairs because there’s so few consultation rooms that are available and the ones that are there will already have been occupied.”

Ms Lord said distressed people and upset children are cramped into “what is quite a dirty and poorly laid out building”.

Men’s Voices Ireland told the committee the family law system has evolved over the past 40 years “with very little regard for the rights, needs, interests or experiences of men”.

Frank McGlynn, a member of the group, said it is in favour of people attending mandatory mediation ahead of going to court.

“We think at the moment access to court should be the last resort. At the moment it’s far too easy and too many people just want their day in court and they get in there a little too easily,” he said.