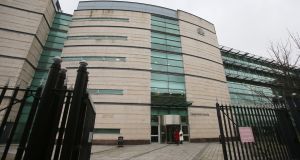 Mr Justice O’Hara heard that surveillance operation was carried out the day after a gun attack on a police convoy in the Ardoyne area of north Belfast on December 5th, 2013. Photograph: PA

Three men allegedly secretly recorded discussing a failed attempt to kill police as well as other terrorist activities on Tuesday went on trial in Belfast accused of offences including attempted murder, preparing and directing terrorism and IRA membership in December 2013.

A prosecution lawyer told Crown Court judge, Mr Justice O’Hara that the trio, 51-year-old Colin Duffy, 50-year-old Henry Fitzsimons and 57-year-old Alex McCrory (whose addresses can’t be given at this time) were covertly recorded and vidoed under an operation “code name Op Idealistic”.

All three deny preparing and directing terrorism, and membership or professing to be members of the IRA, while Fitzsimons and McCrory are also charged with and deny attempting to murder police and possessing of the two AK47 assault rifles and ammunition used in the attack.

Mr Justice O’Hara sitting without a jury in the Diplock-style trial, also heard that surveillance operation was carried out the day after a gun attack on a police convoy in the Ardoyne area of north Belfast on December 5th, 2013 in which 14 shots were fired at the three vehicle patrol by two gunmen.

The convoy was travelling along the Crumlin Road towards Twaddell Avenue to police the nightly protest at the so-called “camp” set up by loyalists following the banning of an Orange Parade by the Parades’ Commission that July.

In the aftermath of the shooting police recovered two AK47 assault rifles, one of which was found in a burnt-out silver VW Passat car used by the gunmen who had fired on the convoy from behind a wall while standing on a tresled scaffold.

The prosecution claim that the accused, Duffy, Fitzsimons and McCrory can by identified from the covert video footage and from an hour-long audio recording of them as they talked in a public park in Lurgan, known as Demesne Park, owned and operated by Craigavon Council.

Mr Justice O’Hara was told it was the prosecution case that an analysis of the audio recordings by two voice recognition experts provided strong to moderately strong support that the defendants were those captured on disc discussing how to go forward “in light of Ardoyne, and how the leadership were regrouping”.

The prosecution lawyer further alleged that this was supported by the video recordings in that the clothing worn by the three suspects in the Demesne Park were similar to that seized from the defendants following their arrests.

“The prosecution case is that the three men present and recorded talking in Demesne Lane are Duffy, Fitzsimons and McCrory,” Counsel claimed.

“The three defendants are close associates and have been seen together by police prior to the meeting and are also friends,” added the lawyer who further claimed the men used their first names, Collie, Harry and Alec.

The voice analysis evidence of the conversation, which the prosecution alleged was not a “normal one”, involving as it did, “an operation which had not gone to plan, and the failings and difficulties in arming a terrorist organisation”, was further proof of the men’s guilt.

The trio’s alleged discussion on other matters, such as problems in planning attack with CCTV in operation “in almost every shop”, the number of police and the ground, was, declared counsel “precisely the type of conversation one might expect from persons directing terrorism”.

Counsel said that the discussions of the men lasted almost an hour and “related almost exclusively to terrorism . . . there was no discussion about everyday issues”.

The lawyer further contended the timing of their meeting, the day following the attack on the police convoy, was also “very significant ... as was its location ... in an area which would be assumed safe” by those worried about being overheard or watched by police. “The content of the conversation and the context are inextricably linked,” said counsel.

The trial has been adjourned until Thursday.