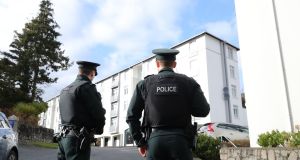 Police outside Glin Ree Court in Newry, Co Down, where the bodies of a man, a woman and a teenage girl were discovered on Thursday. Photograph: Niall Carson/PA

Police in Newry have begun a murder investigation following the discovery of the bodies of three people – a man and a woman in their 30s and a teenage girl – in an apartment.

They were found in a large complex, Glin Ree Court on the main Newry to Belfast road on the northern side of the Co Down town, at about 11am on Thursday

It is believed locally that the three deaths are a murder/suicide but the Police Service of Northern Ireland (PSNI) were unwilling to confirm this last night, saying only that their investigation is into a murder.

According to Det Supt Jason Murphy of the PSNI’s major incident team, who spoke to reporters at the scene, a murder inquiry was under way and the police were not looking for anyone in connection with what had occurred.

He said that yesterday morning, police were contacted by the family of one of the deceased, concerned at not having heard from them for a number of days. The police went to an apartment, believed to be a third floor flat in a four-storeys-over-ground-floor block, and forced their way inside.

Sources have told The Irish Times that the three bodies were found in conditions suggesting extreme violence had occurred. Supt Murphy would not comment on this, saying police inquiries were at a very early stage.

He said that the adult female, believed to be a foreign national, found dead was aged about 37, the teenage girl was perhaps 15 and the dead male was aged approximately 38. He could not comment on what relationship, if any, there was between the three nor their cause of death.

However, no one else was being sought in relation to the deaths, he said.

Alan Kelly: Labour Party unlikely to enter coalition 09:24
Sunny weather expected with temperatures to reach 18 degrees 09:13
Teaching children the main stress source for families adapting to restrictions 02:53
'It is a scary time' - the nursing homes battling coronavirus clusters 02:29
Coronavirus: Why are men twice as likely to die as women? 02:09