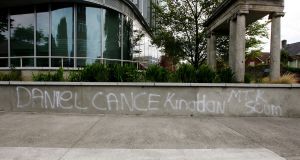 Graffiti near the Burlington Plaza in Dublin 4, where broadcaster SKY has offices. Photograph: Padraig O’Reilly 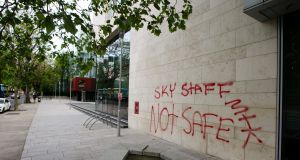 Graffiti which appeared outside the Dublin offices of SKY over the weekend threatening its staff has been linked to the station’s perceived association with MTK, the boxing promoters founded by Daniel Kinahan.

Gardaí believe the graffiti was a response to Mr Kinahan’s growing profile in the boxing world. They suspect the offices of SKY were targeted as the channel has broadcast MTK fights but it has no contract with the company.

“SKY staff not safe” and “Daniel Cance (sic) Kinahan MTK Scum” were some of the messages spray-painted outside the offices on Burlington Road in Dublin 4 on Saturday.

It is thought the reference to ‘cance’ could be a misspelling of ‘cancer’, which is a nickname associated with Daniel Kinahan.

Mr Kinahan has been considered a senior figure in the Kinahan organised crime group which was founded by his father Christy and is now by far the largest Irish criminal gang in operation.

Two years ago the Criminal Assets Bureau told the High Court that Daniel Kinahan, who now lives in Dubai, “controlled and managed” the gang’s operations.

The Kinahans run a global operation estimated to be worth up to €1 billion and are responsible for drugs and arms smuggling across several continents.

“Gardaí are investigating a report of criminal damage that occurred at premises on the Burlington Road in Dublin yesterday, 16th May 2020.

Graffiti was written across a number of walls at the location. Investigations are ongoing,” a Garda spokesman said.

The graffiti appeared outside the SKY offices shortly after news broke that Kinahan had been appointed a “special adviser” to KHK Sports, a high profile boxing and MMA company which was founded by the son of the king of Bahrain.

The appointment forms part of Kinahan’s efforts to rebrand himself as a legitimate figure in the world of boxing and publicly distance himself from the gang’s criminal operations.

These efforts were given another boost last week when famous US boxing promoter Bob Arum said he has been working with Mr Kinahan and praised him as an “honourable man”.

“Dan is like the captain when it comes to the practicalities of doing a fight in the Middle East,” Mr Arum told the Irish Sun newspaper. “He’s one of my favourite guys. I like to deal with guys, no nonsense people, whose word is their bond.”

Mr Arum, who has worked with boxers such as Mohammad Ali, suggested Mr Kinahan will be tasked with organising a long-awaited fight between heavyweights Tyson Fury and Anthony Joshua.

Mr Kinahan, who has no convictions, founded the company as MGM in 2012. In 2016 it organised the “Clash of the Clans” boxing event in the Regency Hotel in Dublin which was targeted by gunmen from the Hutch organised crime group.

Men armed with assault rifles and dressed as gardaí murdered David Byrne and wounded another man. It is believed their primary target was Mr Kinahan but that he had left the event early.

The shooting marked the beginning of Dublin’s most violent gang feud, a feud which as claimed some 20 lives to date.

The following year MGM changed its name to MTK Global and claimed it had parted ways with Mr Kinahan.

The company denied this.

Graffiti threatening the Kinahans or MTK is not uncommon in Dublin. Last year events featuring the boxer Tyson Fury in Cork and Dublin were called off after graffiti appeared targeting the boxer and MTK Global.