Garda's Covid-19 powers will not be revoked early, says Flanagan 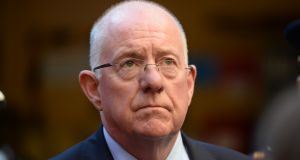 Charlie Flanagan: said the measures to enforce Covid-19 restrictions will be retained only for as long as they are “necessary, effective and proportionate. No longer”. Photograph: Dara Mac Dónaill

Garda powers to enforce Covid-19 restrictions will remain in place for the short term, Minister for Justice Charlie Flanagan has said.

Asked if the Garda powers to prosecute those in breach of the restrictions could be revoked as Ireland’s infection numbers continue to drop, Mr Flanagan said the measures will be retained only for as long as they are “necessary, effective and proportionate. No longer. The lifting of them will be guided purely by public health”.

However there are no plans to lift them in the short term, he said in an interview with The Irish Times. The Irish Council for Civil Liberties has called for the powers to be revoked when Ireland enters into the first phase of reopening on Monday.

“I’m not in a position to give a date for when they will be lifted,” said Mr Flanagan.

The legislation has a sunset clause of November the 9th, but the Minister indicated the Garda powers could be revoked earlier if the infection figures continue to improve.

He said there has been “a bit of” anticipatory behaviour by the public – people becoming complacent about the restrictions in the expectation they will be lifted soon – but that “by and large the public has been very co-operative and appreciative.

“They understand clearly that these extraordinary measures have had to be taken in the interests of public health, i.e. to keep them safe.”

Mr Flanagan said that “of course” there are a small number of people flouting the laws but that sanctions are being used. He declined to comment on gatherings outside the Four Courts which were allowed to proceed by gardaí while a protest by former retail workers was dispersed.

“I acknowledge there have been some high-profile difficulties experienced by An Garda Síochána but I am satisfied [with their performance].”

He paid tribute to the work of the Garda in assisting members of the community.

“What we are now seeing is community policing at its best. On a daily basis I hear of very positive stories about gardaí up and down the country.”

Mr Flanagan said he is not concerned that the introduction of restrictions on people’s movements will set a precedent for future governments to bring in draconian legislation.

“The Government has taken these measures only because we had to. I am confident in our system of checks and balances.

“It was made perfectly clear that these were exclusively and solely a response to a public health crisis and that they were temporary in nature, so we are not setting any precedent for any future government to introduce any draconian laws or measures.”

Spit-hoods, wire and mesh face coverings which are forcibly placed over the heads of suspects to stop them spitting or coughing at gardaí, should only be used for the duration of the public health crisis, Mr Flanagan said.

The Minister called the practice of spitting at gardaí “completely reprehensible” but added that only a “very few” are doing it.

He also praised the Irish Prison Service including officers, chaplains and the prisoners themselves, for keeping facilities free of the virus. “We should be very proud of them.”

Virus outbreaks in other countries have resulted in violence and many deaths in prisons, including in the UK prison system.

He rejected the view that some of the measures have been too strict, including the practice of keeping prisoners with symptoms locked up 24 hours a day with no access to showers.

“All cells accommodating prisoners in isolation have standard washing facilities and prisoners are provided with warm water, soap and towels.”

The Minister said he is against proposals to introduce non-jury courts for ordinary crimes in light of the pandemic. The Bar Council has conducted research into the proposal which would see defendants able to opt for a non-jury trial.

He said the pandemic has “accelerated” many court reforms, including the introduction of remote hearings for certain types of cases, and that these reforms will likely be retained after the crisis.