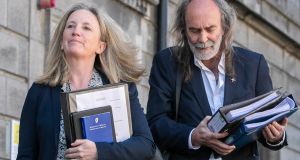 The effort by John Waters and Gemma O’Doherty to challenge the measures introduced by the Government in response to Covid-19 crisis, has fallen at the first fence.

The two, who represented themselves in court and described themselves as investigative journalists and Irish citizens, were found to have a legitimate interest, or standing, in relation to some of the matters they wanted to challenge, though not all.

However Mr Justice Charles Meenan, in a reserved judgment delivered electronically, found they failed to produce facts which, if proven at a full hearing, would justify the orders they were seeking that the emergency laws were “null and void”.

The two were seeking a judicial review. The matter that has been ruled on by Mr Justice Meenan is whether their application for such a hearing should be allowed.

In order for an applications to be allowed, applicants must show that they have an interest in the matter (standing), and must produce facts which, if proved at the hearing, could lead to the order being sought from the court (an arguable case).

The judge found Mr Waters and Ms O’Doherty had failed to produce facts that might support their claims, and so refused their application.

The judge said an application for leave to take a judicial review “has a low threshold, but it is, nonetheless, a threshold.”

Although the application was brought on ex parte basis – meaning that only the movers of the application were originally involved – the judge who presided over that initial sitting, Mr Justice Mark Sanfrey, decided that the respondents should be notified so they could also address the court.

Among the reasons cited by the applicants in support of their case was the fact that three members of the Government had lost their seats in the general election, that the Government was a “caretaker” government, and that sittings of the Dáil that considered the emergency legislation involved a reduced number of deputies as part of the State’s social distancing policy.

However, it was successfully argued by counsel on behalf of the Dáil and Seanad, Francis Kiernan BL, that the separation of powers meant that the court could not rule on these matters.

Mr Waters and Ms O’Doherty wanted to challenge the constitutionality of the Health (Preservation and Protection and other Emergency Measures in the Public Interest) Act, 2020, and the Emergency Measures in the Public Interest (Covid-19) Act, 2020. They also wanted to challenge a number of statutory instruments, as well as changes to the tenancy and mental health laws.

The judge found there was no doubt that the emergency measures restricted people’s constitutional rights.

However these rights were not absolute, something that was accepted by the applicants. If it was to be found that applicants had an arguable case, they had to depose before the court facts that could support their claim that the emergency measures are disproportionate. “There was a complete failure by the applicants to do so,” the judge said.

He noted that the narrative contained in the applicants’ 34-page affidavit ended at March 16th, when the deaths of two people from Covid-19 had been reported. The judicial review application was made four weeks later. Mr Waters and Ms O’Doherty swore their affidavit on May 5th, by which time it was being reported that 1,375 people had died from the virus. “The applicants made no reference to this,” the judge said.

While the applicants questioned the accuracy of the figures about infections and deaths, and referred to “fraudulent” science, they submitted nothing other than their views in support of this, he said.

On the other side, Bernie Ryan, principal officer of the Department of Health, set out in detail in her affidavit the background to, and reasons for, the emergency laws.

Mr Waters and Ms O’Doherty had no relevant qualifications or expertise and “relied upon their own unsubstantiated views, gave speeches, engaged in empty rhetoric, and sought to draw an historic parallel with Nazi Germany, a parallel which is both absurd and offensive,” the judge said.

In relation to their challenge to changes to the Mental Health Act 2001, introduced in response to the pandemic, the judge said he did not believe the applicants had the necessary standing.

“This Act, in its terms, is clearly directed towards persons who are in a defined category. The applicants made no case that they were within such a category.”

A similar situation applied in relation to the challenge they wanted to bring in response to changes to the Residential Tenancy Act 2004, he said.

The judge also rejected a claim that the physical hearings where the application was heard in the Four Courts in Dublin, were not in keeping with the Constitution because the social distancing rules were applied.

He invited the parties involved in the case to make written submissions as to what orders he should now make, “in particular, the matter of costs.”

The normal rule is that people who bring court actions and lose pay their own costs and the costs of the other side. Exceptions can be made if the judge rules that the matters raised were of public importance and were not brought vexatiously.