Gardaí stopped and searched the man in Muirhevnamore area of Dundalk 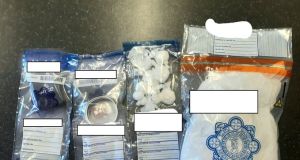 The drugs seized by gardaí in Dundalk on Sunday. Photograph: An Garda Siochána

A man in his 20s has been arrested and charged following the seizure of more than €33,000 worth of cocaine in Co Louth at the weekend.

On the Sunday evening, gardaí stopped and searched a man in his 20s in the Muirhevnamore area of Dundalk, Co Louth.

During the course of the search, gardaí recovered suspected cocaine with an estimated value of €2,000, pending analysis.

The man was arrested and detained at Dundalk Garda Station.

During a number of follow-up searches related to this incident, gardaí seized a further quantity of suspected cocaine with an estimated value of €31,500.

The man has since been charged and is appearing at Ardee District Court this morning.