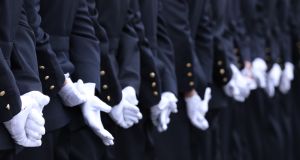 An Garda said 1,436 gardaí had reduced hours as a result of mental health issues between 2016 and 2018. Photograph: Photo Eamonn Farrell/RollingNews.ie

The rate of suicides among gardaí is over four times higher than in the general population, new figures show.

Thirteen serving gardaí have taken their lives over the last three years, according to figures released under the Freedom of Information Act.

According to the figures, an additional 15 gardaí were granted early retirement on the grounds of mental ill-health; five in 2017, four in 2018 and seven in 2019.7

During 2018 and 2019, 401 gardaí were referred for psychiatric, psychological assessment or related primary mental health services while 51 were referred for cognitive behavioural therapy over that two year period.

No records for the number of gardaí referred to for such treatments are held for the year 2017.

The figures for 2019 are not available.

The Garda FoI officer outlined that absences due to sickness are listed under three categories; ordinary illness which includes mental health, occupational injuries arising from duty, and critical illnesses.

The officer said there was no specific sub-category on the Garda’s sickness absence management system for absences due to stress, anxiety or depression.

The officer said in some cases “this is recorded under the mental health sub-category or in the comments filed against another sub-category. It is not possible to show the comment on a sickness absence report.”

The FOI officer also said no records existed as to the number of serving members known to have attempted suicide, the numbers denied early retirement after presenting with mental health issues, the numbers receiving psychiatric/psychological treatment funded by An Garda Síochána or the numbers of gardaí referred for addiction treatment.

The response followed request for details on the the number of members of the force taking sickness absence because of post-traumatic stress disorder, work-related stress, anxiety, depression, occupational stress, stress and any other mental health disorder/illness, and the total number of days taken/lost because of the above.

Responding to the data, Pat Ennis, GRA General Secretary said there were inadequacies in the capture of mental health and injury absences in the force.

“The GRA believes the system for collating this data should be updated to reflect more accurately the circumstances of all absences including mental health and injury on duty due to assaults on gardaí.”

Mr Ennis said he was aware of gardaí not seeking absences for mental health issues for fear it could impact on their career.