‘If I get corona I will cough in your face’: Messages express hate for soccer star’s family 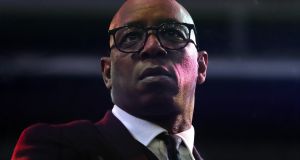 Ian Wright, who has worked as a TV pundit since retiring from playing soccer, shared some of the hateful messages he received by posting them on his own social media accounts. File photograph: Nick Potts/PA Wire

Mr Wright, who has worked as a TV pundit since retiring from his playing career, shared some of the messages he received by posting them on his own social media accounts on Monday.

“I know I’m not meant to look at them, but these messages still hit me so hard man. This is a child,” he said, accompanied by images of some of the messages he had received on his Instagram account.

“This kid as [sic] a direct line into me & is able to send this without any worry,” he added of the messages.

As well as being racist in nature, the messages also expressed hate for Mr Wright’s family members, including his siblings and parents.

“Your [sic] like 65 years old,” one message stated, “if I get corona I will cough in your face and give you your death sentence.”

After Mr Wright shared the content to his 1.7 million Twitter followers, many people replied and suggested the matter should be investigated by a police inquiry.

Late on Monday Mr Wright’s tweet about the abuse had been retweeted over 17,000 times and had generated 16,000 comments in reply.

Garda sources said while the messages appeared to come from a social media account bearing the name of an Irish teenager, it had yet to be established who the author of the messages was and who had sent them to Mr Wright.

Gardaí are also examining whether the teenager’s account was hacked or whether his phone was taken by a third party who then sent the messages to Mr Wright from the teenager’s Instagram account without his knowledge or consent.

Gardaí confirmed late on Monday night, via social media, that they had opened an inquiry into messages of a racist nature shared on social media.

“An Garda Síochána is investigating an incident where abusive/racist comments have been reposted on social media platforms. No formal complaint has been received but an investigation has commenced into the comments in line with our diversity and integration strategy,” the Garda statement said.

“A male adult teenager has presented voluntarily at a Garda station and has been interviewed. A file is now being prepared for the Director of Public Prosecutions. An Garda Síochána are appealing to the public not to engage in social media commentary in relation to this matter.”