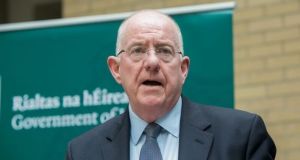 Minister for Justice Charlie Flanagan is due to receive an ‘urgent’ report from the Irish Prison Service on Friday. Photograph: Gareth Chaney/ Collins

A high-level task force is urgently needed to develop solutions on how to handle mental health issues that arise in the criminal justice system, the Irish Penal Reform Trust has said.

The trust’s director Fíona Ní Chinnéide called for the Departments of Health and Justice, the HSE, the Garda and other bodies to formulate a plan that aims to meet the needs of people caught up in the system without adequate supports.

She responding to the case of a brain-damaged homeless man who spent more than a year in Mountjoy Prison’s high dependency unit. He was detained there despite medical reports that he was of unsound mind and needed residential care.

He was found to have “absolutely filthy” feet and hugely overgrown and curled toe nails, a rare nail disease known as ram’s horn not seen in the State in decades. The court appointed doctor described his bed linen as “appallingly filthy” after not being changed for months.

The High Court was told that a senior HSE official cancelled a residential care plan for the man because of “resource issues” and that it was being proposed to discharge him to access homeless services. The man had a history of mental disorder but did not meet the Mental Health Act criteria for admission to psychiatric units.

“No one should be detained in prison due to a lack of housing, support housing or healthcare supports in the community,” said Ms Ní Chinnéide. “Prison exacerbates mental health and other health issues, and must be reserved for only the most serious offences. Prison should not be used to warehouse people whom social policy has failed.”

Minister for Justice Charlie Flanagan on Friday said he had spoken to the Governor of Mountjoy regarding the case and sought an “urgent report” from the Irish Prison Service after becoming aware of the “disturbing” story.

He said he would also discuss the matter with Minister for Health Simon Harris.

Dr Lisa Cuthbert of Pace, which works with people convicted of crimes in order to try to prevent them from reoffending, said prison was “no place for anyone with a severe mental illness”.

She said people going into prison with “mental health issues is a result of the failure of the health system in the community to manage problems properly”.

“In prison there’s an operations approach for security rather than a health led response. That’s the problem; a prison is not a hospital. The whole approach is wrong, it needs a serious re-look. Health needs should be with the department of health and not justice. They need to look at a coordinated response.”

The Jesuit Centre for Faith and Justice called for more places on secure psychiatric wards to be made available so people with severe mental disorders are not held in prison.

“This man’s treatment has been tragic and unjust. But it would be a mistake to imagine that this is simply an isolated case. It is, in fact, an acutely stark representation of what many other people with similar health needs have suffered.”