‘No room on courts website’ for High Court Master’s rulings 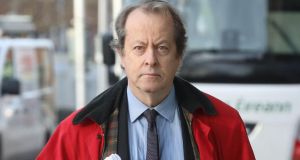 Master of the High Court Edmund Honohan has complained that the Courts Service will not publish his rulings because it says ‘there is no room on their website’. File photograph: Collins Courts

The Master of the High Court, Edmund Honohan, has complained that the Courts Service will not publish his rulings because it says “there is no room on their website”.

Mr Honohan occupies a quasijudicial role and is responsible for dealing with certain pretrial applications in High Court proceedings. He sometimes publishes extensive written rulings in his cases but, unlike judgments from the superior courts, these are not available on the service’s website.

The service has also stopped supplying physical copies to the Law Library in the Four Courts.

Mr Honohan raised the issue at a hearing last week before reading out a ruling he had made in a case concerning Allied Irish Banks.

In his decision, he ordered that a full hearing take place instead of one based solely on sworn affidavits because he had concerns the High Court “will not follow the law as set out by the Supreme Court” in relation to issues arising.

He brought a stack of copies of the ruling to court which was described by one lawyer as being “2ft high”.

Mr Honohan said he had asked the service why it did not publish his ruling alongside the written judgments from other courts and was told it did not have room on its website.

A spokesman for the service said it only published judgments that come from judges and that “quasijudicial officials are not judges” and their rulings were not published because they “have no binding or persuasive weight or authority”.

“To publish them might lead to a misunderstanding, particularly on the part of non lawyers, that they carry such authority when they do not,” he said, adding that decisions of other similar officials such as county registrars were not published either.

A spokeswoman for the Law Library said the service was the “sole publisher of the Master’s rulings” and that since the service stopped publishing them it no longer had a means of acquiring them.

Mr Honohan has clashed with the High Court judges on several occasions in the past over his jurisdiction to strike out cases.

President of the High Court Peter Kelly removed all debt cases from the Master’s court earlier this year, provoking criticism from supporters of Mr Honohan who see him as a strong supporter of debtors’ rights. Mr Honohan did not respond to attempts to contact him for comment.