Man to appear in court over death of prisoner in Cloverhill 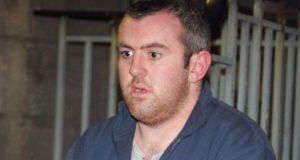 Mark Lawlor died after an apparent assault in Cloverhill Prison over the weekend. Photograph: Collins

A man in his fifties is due to appear in court charged in relation to the death of a prisoner in Cloverhill Prison over the weekend.

Dublin criminal Mark Lawlor (37) was found strangled to death in his cell in Cloverhill Prison on Saturday.

Lawlor, who has had addresses in Ballymun and Balbriggan, suffered from paranoid schizophrenia and bipolar depression and had scores of previous convictions.

A man in his 50s was arrested over the killing on Sunday and is due to appear in Cloverhill District Court this morning.